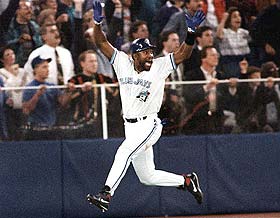 Memories often elicit false emotions, because sometimes they're merely isolated moments that don't necessarily convey the broader picture. Joe Carter, the last player to touch the ball at the conclusion of both of the Blue Jays' championship-clinching victories, was loved and adored perhaps more than any other Blue Jay, past or present. His infectious smile and timely hitting endeared everyone to him (myself included), but the truth is that he simply wasn't as great as his legend. He was a very gifted ballplayer, as he amassed close to 400 career home runs, stole upwards of 230 bases, and set a major league record with five three-homer games. But for all the home runs and RBI he amassed with the Blue Jays, he seldomly reached base and possessed mediocre defensive talent. On the 1993 Blue Jays, he was probably the team's sixth best everyday player, and for all his postseason heroics, his OPS during the 1993 playoffs was below .700.

As a prospect, Carter was considered to be a special talent, as evidenced by the fact he was selected second overall in the 1981 amateur draft by the Cubs. In fact, the Cubs were so enamoured with Carter's potential that they drafted him in 1979 and 1980 before he finally signed with them in 1981. For starters, he enjoyed a very distinguished career at Wichita State University, where he was a three-time all-american and the 1981 Sporting News College Player of the Year. In hindsight, the talent chosen in the first round of that season's draft wasn't particularly special. Mike Moore, chosen first overall ahead of Carter, enjoyed a long, successful career in which he 161 games. Ron Darling also had a fine career, though not an especially remarkable one. However, the real talent, for reasons unbeknownst to me, was chosen in subsequent rounds. Those drafted after the first round include: Mark Gubicza (2nd round), Mark Langston (2nd), Frank Viola (2nd), Tony Gwynn (3rd), David Cone (3rd), John Franco (5th), Devon White (6th), Fred McGriff (9th), Lenny Dykstra (13th), and Bob Tewksbury (19th). Each of the players had comparable, and often much more productive, careers than Joe Carter. But in fairness, drafting Carter was a still heck of a selection, especially considering how poorly those drafted in the first round fared in the majors.

His time with the Cubs was rather brief, though. In 1984, the Cubs were a very talented team, though they needed some pitching help. Remarkably, they hadn't made the playoffs since 1945, so one cannot fault them for trading Carter at such a tender age. In return for Carter, Darryl Banks, Mel Hall, and Don Schulze, the Cubs received Rick Sutcliffe, George Frazier, and Ron Hassey. After the trade, Sutcliffe went 16-1 en route to the NL Cy Young award, which led to a birth in the playoffs. In Cleveland, meanwhile, Carter had a difficult time adapting to the major league game, and failed to display the power and speed many knew he possessed.

1986, his third season with the Indians and fourth in the majors, was likely the best season in his career. He showcased a great combination of power (74 extra base hits) and speed (29 SB). Moreover, his defense was actually above average; his FRAA (fielding runs above average) was +7, the highest one-year total he ever posted in his career. One aspect of Carter's career people often ignore is his speed, because he most certainly was fast. Of course, considering the 1980s showcased many more speed demons, that sentiment is certainly warranted. His overall game, following that rather productive season, never really improved; by that point he was already 26 years old, after all.

In 1989, he was traded to the Padres in what turned out to be a very good deal for the Indians. For Carter, they received Sandy Alomar, Carlos Baerga, and Chris James. As everyone remembers, the Indians were loaded in the outfield during their great run of success in the mid-'90s, so Carter wouldn't have offered much value to them. A great trade for which the Padres are not nearly credited enough.

With San Diego, Carter was somewhat of a dud, as he hit .232/.290/.391. Sure, he had 121 RBI, but as Keith Woolner once wrote, "An RBI may be the icing on the cake, but it doesn't tell you who was the best baker." And Carter certainly wasn't the best baker. A .681 OPS simply doesn't help create enough runs to make him an effective corner outfielder. Those high RBI totals are more an effect of the fact that he had an inordinately high number of players on base in front of him. For all the years he had more than 100 RBI (10), he only scored more than 100 runs once, in the aformentioned 1986 season.

When he came over to the Blue Jays from San Diego, in what turned out to be a rather good deal, Roberto Alomar, not Carter, was the the best player acquired. Here are the how many Win Shares each player accumulated after the trade:

And here are how many Win Shares each player accumulated for his respective team following the trade:

Alomar posted more Win Shares in much fewer games (703 compared to Carter's 1039), and at a much more important defensive position. Nevertheless, it's important not to discount Carter's contribution to the team. From 1991-'94, he posted above average OPS+ totals and he hit the only come-from-behind, World-Series-winning home run in MLB history. However, had he posted an OBP higher than .250 during the 1993 World Series, perhaps such heroics would not have even been necessary.