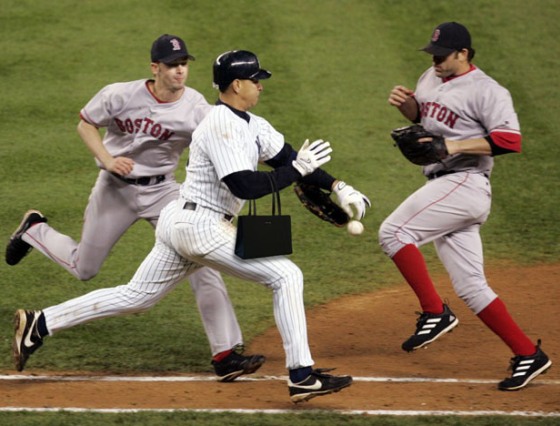 Continuing my preview series, lets take a look at the New York Yankees , a team whose stadium I used to pass by every morning on the subway on my way to high school (you have no idea how different both NY and Yankee Stadium were in the mid 90s). The Yankees have won the AL East for what seems like forever, but have known mostly frustration since all-time great closer Mariano Rivera failed to hold the lead in game 7 of the 2001 World Series. Will this be the season their playoff frustration ends? Or will it be their division dominance that comes to an end? Or neither? Will their fans stop ridiculously and inexplicably booing one of the best players in the league?

Moves : The Yankees traded chaw-lover Jarrett Wright for reliever Chris Britton (Baltimore), exchanged Randolph Johnson for Luis Vizcaino and minor leaguers (Arizona), the most notable of which was Ross Ohlendorf, and traded surly village jerk Gary Sheffield for three power arms, the closest to making a contribution of which is Humberto Sanchez. (Detroit) The Yankees then signed old favorite Andy Pettite to replace Johnson, and also picked up Doug Mientkiewicz and Rule 5-ed Josh Phelps to split time with the Minkster. Finally, for the first time since the 80s, the Yankees look likely not to have can't-help-but-like-him Bernie Williams.

Projected Typical Lineup : (I'm not giving a lot of time to batting order, and, as always, BA/OBP/SLG stats in parentheses are 2007 ZIPS projections)

This is a pretty incredible group. First, the weak spots. Damon is not really a weak spot, but his projected stats are only decent for a leadoff man, and could even slip a notch if the power he flashed last season (.482 SLG v. career SLG of .436) is not sustained.

First base looks to be a sore spot. The Yankees appear prepared to make Giambi a full-time DH, not only because he is a horrible fielder (-8 FRAA last season is actually not as bad as I expected) but because his health is questionable in their view. It looks like memorabilia afficianado Mientkiewicz will split time with either Josh Phelps (hey, remember him?!) or Andy Phillips .

None are entirely without useful tools, but none are suited for regular time either. Minky has historically been a good glove man and offers some respectable on-base skills but his power is lousy for a first-baseman and he is coming off major back surgery. Also, Minky has not shown lefty-righty splits (Career .780 OPS v. left and .759 v. right is actually a reverse split) which does not really make him well-suited for a platoon. Phillips is a good fielder as well and offers decent power but has been awful at getting on base in his major league career (career OBP .266). Phelps actually has the potential to hit league average or so for a first baseman, but is not good with the glove and does not hit righties well. I suppose a Minky/Phelps platoon won't kill the Yankees, but it is not really good use of two roster spots either.

But all this dwells too long on the negative; the fact of the matter is that the yankees offense is absolutely unbelievable. They scored 930 runs last year and this year could actually score more, assuming Matsui, Cano, and Abreu are around for the whole season. The lineup is just outstanding 2-8.

Jeter is nothing special with the glove, but he is a fantastic hitter and will continue to drive teams nuts with his well-rounded offensive skills. Abreu looked rejuvinated with the Yanks last season, is one of the top on-base men in the league and, like Damon, benefits from Yankee stadium. A-Rod had a bit of a down year last season, both in the field and at bat, but still had a great season and can be devastating if he can get even a little comfortable, as his 2005 attests. Giambi is one of my least favorite all-time players, due to the fact that he pathetically bitched in 2001 that Ichiro did not deserve to win the MVP while Giambi himself spent the entire season cheating , but he brings unbelievable skill in both on-base and power.

Posada is an unsung Yankee hero in the sense that getting such extraordinary production from the catcher so consistently for so long has given them a huge advantage. He was the second-best catcher in the AL last season at the plate - only Joe Mauer was better (by most metrics), and Posada also has become excellent at throwing out runners (while the third big offensive threat in the AL at the catcher position, Victor Martinez, is horrible at that particular skill).

Matsui is as reliable as they come, and Cano was outstanding last season and really seems to be coming into his own - while he has little patience at the plate, his contact skills and power are so good that they make up for it.

Don't get me wrong, there are a few question marks. Posada has shown remarkable durability, but is 35 and has to slow down sometime. Matsui looked good after coming back from a horrific fractured wrist injury, but it remains to be seen how strong he will be. Cano needs to hit for a high average to be really successful and the power he showed after returning from injury last season may have been somewhat flukish. Damon had a very good season last year but his OBP declined again and if he dips below .350 (.357 last season), he won't be a good leadoff hitter.

Continuing on question marks, the team as a whole is a bit suspect defensively, and is not young --only Cano (24), Cabrera (23) and Phelps (29) are younger than 30, and Phelps and Cabrera are not really starters. The bench, besides Cabrera, who looks to be an excellent 4th outfielder, is very weak - it is somewhat hilarious to see all the at-bats given to Miguel Cairo , particularly when Torre plays him at 1st Base. On the whole, though, this is an unbeliveable starting lineup whose skill at reaching base and thump more than makes up for their defensive shortcomings and brittleness.

Jeff Karstens (5.25), Darrell Rasner (5.12), and Humberto Sanchez (4.75) are also in the mix for starts. There is no one on this list who doesn't come with a question mark, but that's true of every pitcher. Mussina is coming off a good year but is near 40 now and has not really excelled in his other years in pinstripes. Pettite is making the switch from the national league central (although Houston is a tough home park for pitchers, especially southpaws) and has some injury concerns. Wang , was great last season but many in the sabermetric community see him as a prime candidate for regression because of his low strikeout rates. Igawa is unproven and may end up in the bullpen, while Hughes looks like he is the real thing but may not be quite ready this season. Rasner and Karstens don't look to be back of the rotation types at best, while Pavano hasn't pitched in almost two years and hasn't proven anything in NY or the AL.

For my part, I think it is a better rotation than last season. Pettite looked great the second half of last season, and Mussina is steady as she goes. Pavano looks to have finally put his injury troubles behind him, and Hughes could be a huge boost. As for Wang, while he probably would benefit from a strikeout off-speed pitch, I don't see why he can't continue to be successful, given his propensity for limiting walks and big flys and inducing ground balls. It is not as if he is a soft-tosser (he sits on mid-90s with his sinker) and he does seem to induce a lot of soft contact.

The Yankees bullpen features the time-honored Torre strategy of basically using 3 relievers - a closer, a setup guy, and a 7th inning or second setup guy. Everyone else essentially gets garbage innings. Yes, this is a horrible strategy. The good side for the Yankees is that bullpen pitching is so volatile that it forces every manager (even Torre) to innovate and switch things up a little to stay with the hot and healthy hand.

This is a better group than it's been in the past. Rivera is still the best in the business and shows little signs of aging. Farnsworth has not-great control but his HR allowed rate from last season will probably normalize. Britton was very good last season for Baltimore, while Proctor showed some reliability for the Yankees last season. Myers will continue to lefty-specialize, while Bruney showed flashes.

The reason to feel good about this group is that Farnsworth, Britton, Proctor, and Bruney all show power arms. Sanchez may also factor in the bullpen this season, as may J. Brent Cox, a 23-year old hard thrower.

The Yankees are going to be tough to beat this season. Their rotation looks improved and so does the bullpen. The lineup will continue to fill the bases and then produce runs and more than makes up for d that is a bit shaky. Most worrisome of all, the Yankees managed to reload a little while not sacrificing any of their competitiveness this season. They got good quality players for Sheffield and Johnson (particularly young power arms) and replaced them with Abreu and Pettite, who only cost money. They haven't traded away their young talent and now have a good farm system (although a little weak on position players), and, for the past few seasons, have mostly avoided tying themselves up with long, expensive deals. And their young players like Wang, Cano, and Cabrera have provided quality production on the cheap. They look strong again heading into '07 and beyond.