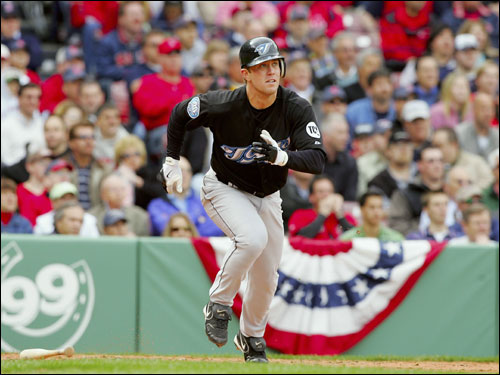 The Jays had a pretty solid young team even without the recently traded Felipe Lopez. He would dump Raul Mondesi and Shannon Stewart (for Kielty) leaving our outfield with Wells, Reed Johnson and Catalanotto and we were well under way in the JP era.

Aaron Hill is one of my favourite Blue Jays and me and my friends had a man crush on him when he was first called up. There are a lot of other big names but this was a solid pick by JP. If we didn't have Hill here we would have never gotten Troy Glaus so keep that in mind.

The jury is still out on Josh Banks. He was passed over by Jesse Litsch though there have been people (me being one) that would have liked to have seen Banks get his shot. Banks is still 24 and still has time on his side where he's repeating AAA. He will get his shot eventually and may be a solid #5 to a long relief type but he's going to get his chance in the majors. When is the most important question.

Shaun Marcum I don't need to say much about. He was an excellent pick by JP as I bet a lot of teams wish they didn't pass on him.

Justin James and Kurt Isenberg have not really amount to much. Justin James might be able to make it as a reliever as he has a had a decent year in AA/AAA. While with Isenberg just 4 spots later Jon Papelbon was picked by the Red Sox. Looking at NCAA stats Papelbon looked like the better pick even if he was pitching out of the pen and not starting.

Ryan Roberts and Jamie Vermilyea have been contributing to the major league club and have been solid late picks and we may still see them for this year.

Last of course we have Tom Mastny who you may not have heard of (like me). He's a reliever for the Cleveland Indians who does a decent job. He was traded in '04 for John Macdonald.

Overall I'd give JP a Grade B but it's more of a B+ as it has turned out decent for us. Click the entry link to vote.