Share All sharing options for: 2008 Keys to Success, Part I - Vernon Wells 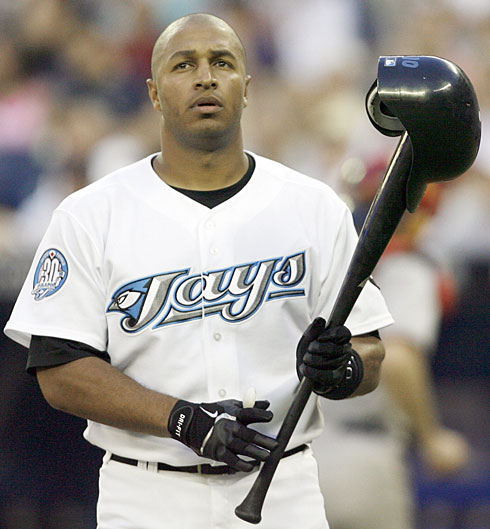 In this series, we'll take a look at some keys to success for the 2008 team if they are to make the playoffs and do a little delving into their likely outcome, based on a combination of statistics and observation. Our first edition will focus on the Jays' franchise player, Vernon Wells. Wells' poor performance last season, coming on the heels of a huge 7 year, $126 million contract, was one of the biggest reasons that the Jays offense struggled as it did, and it is still unclear to what extent it was impacted by Wells' injured left shoulder, upon which surgery was performed at the end of last season.

Here are Wells' stats over the past three seasons:

At first blush, Wells' 2007, although by far his worst season (85 OPS+) doesn't look to dissimilar from his 2005, and, in fact, 2006 looks like the real outlier, and looks like it might have been fueled by BABIP, which is generally recognized as something that hitters have some, but not total, control over. However, if one looks a little bit closer, there are some subtle differences that come into focus. First, Wells' isolated power was way down (.158 as opposed to .197 lifetime and .194 in his "bad" season of 2005.) It is very unusual for a healthy 29-year old to suddenly experience a power outage. Second, Wells' line drive percentage (LD%) was the lowest of his career, and his fly ball percentage (FB%) was highest. An increase in flyball percentage can actually be a good thing for power hitters, since outfield fly balls are only slightly more likely to become outs than ground balls and more outfield fly balls generally means more home runs. However, in Vernon's case, the increased FB% corresponded with a precipitous rise in infield fly balls, which are a bad outcome for a hitter. Vern's IFF% jumped from only 12.2% in 2006 to a whopping 19.1% in 2007. Combining Vernon's K% with his IFF%, we're looking at a 2007 in which 35% of the time, Vernon struck out or hit an infield fly - so it's no wonder that his BABIP was the lowest of his career. Vernon also hit a lot of infield flies in 2003, a very good season for him, and 2005, a "bad" season, but in those seasons, his K rate was substantially lower than in 2007.

Based on these factors, it appears as if there's a good chance that Vernon's shoulder substantially affected his season. As anyone who has played competitive ball knows, the lead shoulder (left shoulder for righties, right shoulder for lefties) is vital to hitting (not the greatest news for Rolen, I know) - it is the lead shoulder that drives the bat through the zone. It makes sense that restricted movement and power in the left shoulder would cut line drive percentage, while at the same time causing a greater than usual number of pop-ups. Certainly the shoulder was not the only cause, as Wells has had similar looking seasons before, but none have been nearly this bad. While I think of Wells as a feel hitter, it's worth noting that his discipline was not impacted in his bad 2007 (his BB% was less than .5% lower in 2007 than 2006 and actually higher than 2005), which suggests that the cause is mechanics, for which a shoulder injury could easily be a cause. To the mostly untrained observer, it definitely looked like Wells was having trouble putting good swings on balls, popping up many outside pitches even in good hitters' counts.

Wells underwent surgery in September to repair a partially torn labrum in his left shoulder and to remove a cyst. The injury was apparently ailing Wells for most if not all of the season, but Wells missed almost no time (until he was shut down) and didn't admit he was feeling pain until well into the season. The labrum was repaired, but the cyst was not removed as it was apparently too close to a nerve. Wells is apparently feeling much better and expects to be at full strength for spring training.

Here are some projections for Wells 2008 season:

As you can see, James basically expects Wells' to rebound and put up a season more or less exactly in line with career norms, while the others expect Wells to be almost 80 points better in OPS over 2007 but not as good as he's been in the past. All the projection systems have Wells as an above-average CF (generally good for about a .770 OPS) which, combined with his defense, makes him a valuable player. However, no one is expecting a season anything like 2006, where he managed a .900 OPS (second-highest in his career to 2003).

The stats, projections, and injury outlook all suggest that Wells will rebound to be a valuable player in 2008. The question is (besides the obvious question whether that's worth $126 million!) whether that will be enough for the Jays. Wells is a critical piece of the offense. Our daring, out-on-a-limb projection: maybe. Please contribute your outlook on Wells' upcoming season and what it means for our heroic Corvidae in the comments!