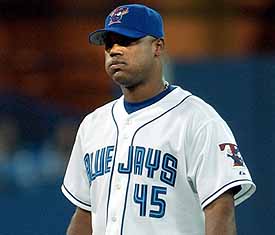 Kelvim Escobar, born April 11, 1976 in LaGuaira, Venezuela was signed by the Blue Jays as an amateur free agent when he was 16 in 1992 by former Jay super scout Epy Guerrero. Latin American players aren't subject to the draft, but then signing them as a free agent as young as 16 seems a bit much doesn't it? Despite less than great control Kelvim moved quickly through the Jays minor league system and in 1997 he was called up to the majors to work in the Jay's bullpen and in the second half of the season he became the Jay's closer getting 14 saves with 3 blown saves as a rookie. He had a good ERA (2.90) even though he walked too many, 18 in 31 innings of work. He had great ‘stuff' striking out 36.

Before the 1998 season GM Gord Ash signed free agent Randy Myers to a 3 year $18 million contract to be the closer. To say it didn't work out is an understatement. Randy had a 4.46 ERA in August when he was traded to the Padres to finish out the season and retire. Escobar was moved in and out of the rotation starting 10 games and relieving in 12 others. He ended up with a 3.73 ERA, lowered his walk rate some (35 walks in 79.2 innings) and struck out 72.

2000 saw Kelvim bouncing back and forth between the rotation and the bullpen making 24 starts and 19 relief appearances. He ended up with a 10-15 record and 2 saves. Once again he had an ERA above 5 and gave up even more walks, 85 and more home runs, (26) in about the same number of innings (180).

2001 Escobar pitched more out of the bullpen, though he still made 10 starts. He brought down his ERA to 3.50 and his strike out rate went up, 121 in 126 innings. So before the 2002 season JP traded Billy Koch for Eric Hinske and Kelvim became the closer once again. He earned 38 saves but when you give up 10 home runs and 44 walks in 78 innings and have a 1.526 WHIP it is tough to keep a closer job.

After 2002 he signed a large contract with the Angels and has had more success in-between injuries. He has a 43-35 record there over 4 seasons. His best year was 2007 when he was 18-7 with a 3.40 ERA. Unfortunately last March Escobar found he had a tear in his right shoulder that needed season-ending surgery. With luck he should be back next season as good as new and still searching for the strike zone.

The Jays couldn't figure out if Kelvim should be a starter or a reliever. He has a power arm but also throws 6 different pitches. His problem always was control, so the Jays always figured if he was in the pen he'd be more a two pitch pitcher and maybe find the strike zone but then would see the number of quality pitches he can throw and figure he would be best as a starter.