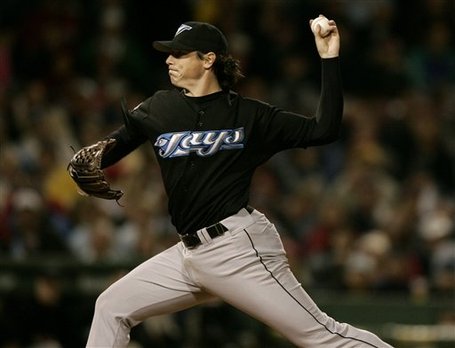 The hard part about doing a top 50 list for a franchise as young as the Blue Jays is that you are dealing with a number of moving targets. Another season like this past one for Downs and he could move up several spots. But we’ll deal with the moment we are in and this is about where he ranks.

Scott Downs, known to his friends as Snakeface, well maybe not his friends but people around here anyway. And we are all his friends right? Scott was born March 17, 1976 in Louisville, Kentucky. He was drafted in the 3rd round of the 1997 amateur draft. Before he made  the majors he was traded to the Twins for Mike Morgan. Then 6 months later he was traded back to the Cubs with Rick Aguilera for Kyle Lohse and Jason Ryan.

His nickname, Snakeface, came from a joke by Jay's broadcaster/blogger Mike Wilner. Wilner said that Downs needed something to strike fear in the hearts of batters, that he is too 'baby faced' to intimidate opponents. So he said that Scott had gotten a snake tattoo on his face. Sorry, no it isn't true but it's a good story, and it had us looking closely at him when he came in to pitch for the first month or so of the season.

In 2000 he made the major leagues, making 18 starts for the Cubs before being traded to the Expos for Rondell White. He made 1 start for the Expos then spent most of the next 3 years having and recovering from 2 Tommy John surgeries. He made it back to the majors in 2004 and made 12 starts for the Expos going 3-6 with a 5.14 ERA. After that season he signed with as a free agent with the Blue Jays.

In 2005 he made 13 starts for the Jays and came out of the pen for them 13 times finishing with a 4-3 record and a 4.31 ERA. In 2006 he was moved to the pen, pretty much fun time except for 5 spot starts. In 59 games he was 6-2, 1 save and a 4.09 ERA. Many starters who become relievers find success by throwing fewer types of pitches throwing their best pitches more often. Relievers can come in and throw hard for a shorter period.

In 2007 he became a very valuable pitcher; pitching in 81 games as a one out lefty type he had a 4-2 record with a 2.17 ERA. Gibbons would have used him every game if he could have. And he held up to the workload very well.

2008 he worked his way into the setup role. Cito seemed to use him in every game that we were ahead and often when we were behind. He pitched multiple innings several times and he was having one of the best seasons we’ve ever had from a setup man, till he twisted an ankle late in the season. He likely should have been allowed to rest the ankle longer but you can’t blame Cito for wanting to keep using him. He had been a sure thing every time out until then.

He has become a terrific ground ball throwing reliever and he gets a good number of strikeouts (7.3/9innings last year). The Jays are talking about turning him back into a starter next season. He has been so good and so valuable as a reliever I’d hate to mess that up but someone has to start for us. A case could be made for him being the team MVP this season. He has lowered his ERA in each of the last 4 seasons.

Scott is married and has two children. He writes the initials of his children, Katherine Grayson and Harrison, in the in the dirt in the back of the mound when he pitches.

Scott Downs rankings on the Jay’s pitchers leader board: