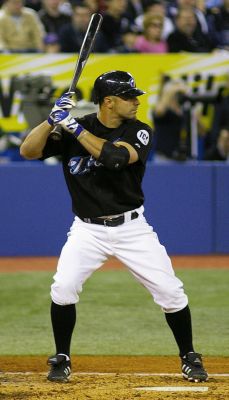 Reed Johnson was born December 8, 1976 in Riverside, CA. He was drafted by the Jays in the 17th round of the 1999 amateur draft out of Cal State Fullerton where he was named an Academic All-American and played baseball and soccer. When you are drafted in the 17th round you have to work harder to make it to the majors and Reed definitely works as hard as any major leaguer. His high socks, great defense, hustle and willingness to take one for the team made him a fan favorite in Toronto.

Reed made the Jays coming out of spring training in 2003 and started the season as part of a platoon in RF with Frank Catalanotto. On July 16th Shannon Stewart was traded to the Minnesota Twins for Bobby Kielty and the platoon was moved to LF with Kielty playing RF. That first season Reed hit .294/.353/.427 scoring 79 runs and driving in 52. He hit 10 home runs, only walked 20 times but his on base percentage was helped by being hit by pitch 20 times, second in the league in that category. Reed made turning into a pitch an art form. Twice as a Jay he has tied the major league record by being hit by pitch 3 times in a game. He also had a 20 game hit streak this season. He was named AL Rookie of the Month for September.

Johnson had his career season, with the Jays, in 2006. He was everything you could want in a leadoff man hitting .319/.390/.479 scoring 86 runs and driving in 49 with 12 homers. He also led the AL with being hit by pitch 21 times. After starting the season in his usual platoon he became a full timer in July.

In the off-season before the 2008 season, the Jays signed David Eckstein, a similar type of player as Reed, to play shortstop and lead off. With Matt Stairs expected to play in LF, Reed looked to be back in a platoon role. Then inexplicably, at least to me, the Jays signed Shannon Stewart and in spring training, released Johnson. I still have no idea why you would release Johnson, who was a year removed from a career season to play Shannon Stewart who was several years removed from his last decent season. Add into the equation that Johnson could play all 3 outfield spots very well, while Stewart could only LF and very poorly at that.

I know I like him far more than I really should, Reed isn't a perfect leadoff man, he'd be better if he would take some more walks, maybe cut down on his strikeouts and he doesn't steal a lot of bases. But his hustle, defense, a good arm in the outfield and his willingness to take one for the team makes him a great fourth outfielder type. Reed is married and has, likely, the worst little patch of facial hair in the major leagues.