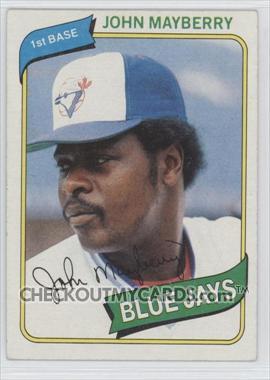 John Mayberry was born February 18, 1949 in Detroit, Michigan. He was a gifted athlete in high school playing baseball, football and basketball. He was drafted in the 1st round (6th pick overall) in the 1967 amateur draft. The number 1 pick that year was by the Yankees, Ron Blomberg, so the Astros could have done a lot worse. The only players in the players picked in the first round that were clearly better than John were Ted Simmons and Bobby Grich.

John was a big, left-handed slugging first baseman. He is listed at 6'3" 230 pounds, but I would guess by the time he played with the Jays he was likely heavier than that. He made the majors as a September call-up in 1968 as a 19 year old, though he only got 9 at bats that month and no hits. The next season he was also a September call-up getting only 4 at bats and still no hits. After 2 more seasons as part-timer he was traded to the Royals where he became a full time first baseman there for 6 seasons.

To be fair baseball wasn't the only place where the drugs were a problem. Cocaine was the drug of choice for the financially well off throughout society. For a time it was close to socially acceptable as alcohol. Time Magazine had a cover story saying it was the in thing, without any suggestion that there could be a downside.

In the 1977 AL Playoffs the Royals were up 2 games to 1. The 4th game started early on a Sunday and manager Whitey Herzog allowed his players to skip batting practice the night before to let them get a good night's sleep. As Whitey tells it:

"Mayberry dragged in real late, but I put him on first base anyway, which was my big mistake". Mayberry had a bad game, dropping pop-ups and striking out. Herzog asked him what was wrong. "The man couldn't even talk and I knew what was wrong....It must have been a hell of a party". Herzog insisted the Royals get rid of him and they did, selling him to the Jays.

A few years later Whitey would make the same sort of trade as manager of the St. Louis Cardinals. Keith Hernandez was a terrific first baseman, but Whitey publically didn't like his work ethic. Privately, Hernandez, it came out later he had the same sort of drug problem and Whitey didn't want him influencing the younger players on his team. So he traded Hernandez to the Mets, for far less than what he seemed to be worth. He might have been right to have worries; two of the Met's young superstars damaged their careers' and their lives' through drug use, though it would be a leap to assign blame.

At the time it was hard to believe that the Royals would give up Mayberry for next to nothing. But as time went on the drug problem in baseball became better known and in a lot of cases managers and teams had turned a blind eye to it.

Anyway, the second year Blue Jay team that Mayberry joined was a terrible team. They finished with a 59 and 102 record. Mayberry's improved in his seasons with the Jays, though he never again was as good as he was his first years with the Royals.

In 1982 he played 17 games mostly as a DH, as Willie Upshaw took over as a first baseman for the Jays, hitting .273/.405/.455, but on May 5th he was traded to the Yankees for Dave Revering, Tom Dodd and Jeff Reynolds. None of the 3 of them played much for the Jays, though Dodd was traded back the Yankees after the '82 season along with Dale Murray for Dave Collins, Fred McGriff, Mike Morgan and cash. That must have been the best trade in Jay's history and one of the better trades in baseball history.

I was pretty young when he played for the Jays but my memory of him was a smiling, happy, big man. I'm sure he it wouldn't have easy to happy, when he was traded the Royals were one of the best teams in the AL and he was traded to what was the worst team in the league. When he was left the Jays he held the team career records for homers and RBI. And although he was a slow base runner he was pretty good defensively at first base.

I haven't been able to find much information about him since he retired. He has a son, John, Jr. who is an outfielder in Texas Ranger's farm system. Mayberry was ranked as the 49th best first baseman in ever in Bill James' Historical Baseball Abstract. I'd imagine he has dropped a few spots since that book was published.