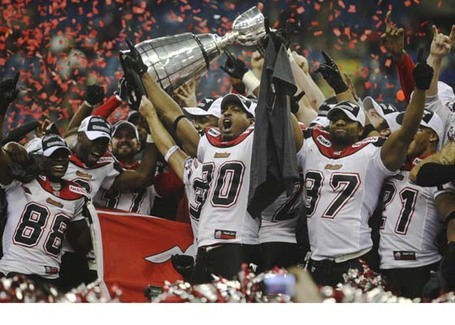 Yeah I know it has nothing to do with baseball, but, hey my team won! The 96th Grey Cup was played today and my Calgary Stampeders beat the dirty, rotten, far outclassed, Montreal Alouettes 22-14, in Montreal no less.  Not the blowout it should have been but it was a good game, great fun to watch. The game was played in the Expo's former home, the Big O.

The Stampeders were down 13-3 before their last drive of the first half when they scored their lone touchdown of the day. In that way the game was much like the Western Final game in that the Stamps were down by 10 before a touchdown late in the first half to make the game close enough for them to come back and win in the second half.

In the second half of this game, the Stampeder defense held the Als to 1 point. Not that we scored a lot, but kicker Sandro DeAngelis hit 4 of his 5 field goals in the second half, the last a 50 yarder with just over 4 minutes left in the game to give the Stamps a 8 point lead. DeAngelis was named Canadian Most Valuable Player.

Game MVP was Calgary quarterback, Henry Burris. Burris and Calgary fans have had a love/hate relationship for a few years now. Burris has amazing ability but far too often in the past he has tried to force plays with bad results. As Stampeder fans, my son and I would often go to games saying 'If Henry throws two or less interceptions we'll win.' Today he only threw just one and we won! Henry finished the game 28/37 for 328 yards and ran for another 79 yards. The quarterback draw has always been one of the most effective plays for Burris.

Burris may have been awarded the MVP but the most valuable players in the game were on defense. As well as only allowing just 1 point in the second half, the Stampeder defense made big two interceptions, one in their own end zone. Linebacker Mike Labinjo, in particular, had a great game, tipping four passes, making one sack and three tackles. He missed some practices this week with the flu and apparently lost 5 pounds to it.

It was a great day for the Stampeder players, many of whom were feeling the team was over looked in the post season awards. Burris lost out to Montreal QB Anthony Calvillo for league MVP and kicker DeAngelis lost out on the Most Outstanding Special Teams Player award.  No other Stampeder was nominated for a major award.. Add in that there were 13 players named from the third place BC Lions to the West All Star team while the first place Stampders only had 6 players named to the team.

Anyway congratulations to my Stampeders. You guys earned it. I don't think I've ever seen so many members of a championship in tears after the winning game, you could tell it meant a lot to them. Yay Stamps!