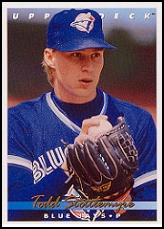 For me the lasting image of Todd Stottlemyre is him sliding, or really attempting to slide into 3rd base during game 4 of the 1993 World Series in Philadelphia. Being a American League pitchers he didn't have much experience running the bases, hesitated between 2nd and 3rd and made a very awkward slide towards 3rd, scraping his chin on the ground and getting himself tagged out.

During the series Philadelphia mayor Ed Rendell said that he would like to bat against Stottlemyre figuring he could get a hit off Todd. One of those idiot things people that have never seen a major league fastball say. Todd suggested he would run a couple of fastballs up and in on the mayor then strike him out on the outside corner. He got the last laugh at the Jay's victory rally saying the mayor could ‘kiss my ass'.

Stottlemyre was born May 20th, 1965 in Yakima, Washington. The Jays drafted Todd in the first round (3rd pick) of the 1985 Amateur Draft, June Secondary phase, out of the University of Nevada, Las Vegas. He is the son of former Yankee pitcher and pitching coach Mel Stottlemyre, a 5 time All-Star and brother of Mel, Jr who pitched in 13 games with the Royals in 1990. So he had the bloodline and the raw talent to be a good prospect. His father's book Pride and Pinstripes is a good read.

A big 6'3", 195 lb, good looking (if a little baby-faced) right-handed pitcher, he threw the usual fastball, curve, slider and change. He didn't become much more than a league average starter, but since he could pitch 200 innings a season which makes him an asset to any team. He tended to be a little emotional on the mound. And off the mound too apparently. There is a youtube audio of him having a bad day out there if you really want to listen to him scream and swear for a few minutes.

1989 he again split time between starting (18 starts) and relieving (9 games). He pitched much better, finishing 7-7 with a 3.88 ERA and brought his home run rate down, 11 in 127.2 innings. 89 was the first season the Jays made the playoffs, losing out to the A's in the ALCS. Todd started game 2 and took the loss going 5 innings and giving up 4 runs.

In 1991 we made it to the playoffs again and this time lost out to the Twins in the ALCS 4 games to 1. Todd started game 4 and took the loss giving up 4 runs in 3.2 innings. But he helped us get to the playoffs with a 15 and 8 record in 34 starts with a 3.78 ERA, his best season with the Jays. His strikeout rate was still low at 4.77/9 innings. He did finish 3rd in the league in hit batters, never being afraid to pitch inside.

1992 was our first World Series win, Todd went 12-11 with a 4.50 ERA in 27 starts, but for the playoffs he was put in the bullpen as we had a pretty loaded rotation that season with Jack Morris, Jimmy Key, Juan Guzman and late season pick up David Cone. He had 1 appearance in our 6 game ALCS win over Oakland and 4 shutout appearances in our 6 game World Series win over Atlanta.

Our second World Champion season, 1993, Todd made 28 starts and finished with his highest ERA, 4.84, since his rookie season. Most players have a career year at 28, not our Todd. He made one bad start in the ALCS that season, taking the loss in game 4, giving up 5 runs in 6 innings. His one start in the World Series didn't go any better, giving up 6 runs in 2 innings against the Phillies but the Jays won the game 15-14, by scoring 6 runs in the 8th inning. Half of those runs came off my favourite closer of all time Mitch Williams.

Stottlemyre's last season with the Jays was the season shortened by the lockout/strike that caused the cancelling of the World Series. He started 19 games and had 7 more relief appearances that year, with a 7-7 record and a 4.22 ERA. With the Jays his strikeout to walk rate was never very good, but it improved after he left the team.

After the 1994 season he signed as a free agent with the A's. He pitched there 1 year then was traded to the Cardinals. In his third season in St. Louis he was traded to the Rangers at the trading deadline. After the 1998 season he was signed to a 4 year, $32 million contract with the Arizona Diamondback. They didn't get much for their investment; because of arm troubles he only made 39 starts over those 4 seasons.