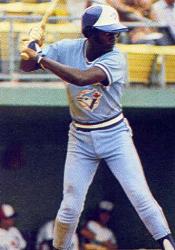 Off the top, I should explain that All-Star selection; in 1984 Damaso Garcia was chosen as the Jay's representative to the All-Star team. We can laugh later at what a terrible pick for the All-Star team Garcia was, but this is Griffin's profile. MLB apparently paid airfare for the All-Star and one other person, generally the player's wife or girl friend. Garcia decided to bring Griffin along. All-Star shortstop Alan Trammell hurt his arm before the game so manager Joe Altobelli named Griffin to the team, because, well, he was there anyway.

Alfredo Griffin was born October 6, 1957 in Santo Domingo, Dominican Republic. He was signed as an amateur free agent by the Cleveland Indians in 1973 at the age of 16. At the time those born in the Dominican Republic were not subject to the amateur draft. He made the majors with Cleveland in 1976 at the age of 18 but only got in a handful of games and in 77 and 78 he also appeared in a few games. In December 1978 he was traded with Phil Lansford to the Jays for Victor Cruz. Cruz wasn't a bad reliever but we got the best of that trade.

Alfredo was put in as our full time shortstop and was Co-winner of the 1979 AL Rookie of the Year, tied in the voting with John Castino, making him the first Jay to win a major award. He hit leadoff and did a pretty good job, batting .287/.333/.364 and played good defense at short. His one weakness, that season, is he had a really poor stolen base percentage, he stole 21 bases but was caught 16 times. I guess that wasn't his only weakness, he made 36 errors, but had good range at short. He set Blue Jay highs in hits (179), runs (81), triples (10) and stolen bases (21). He also led all AL shortstops in batting average, thanks in part to a 19 game hitting streak.

1984, his All-Star season, was likely his worst season, in his first turn with the Jays. He hit just .241/.248/.298. He took only 4 walks all season, but he did have his best season as a base stealer, stealing 11 bases and being caught only 3 times. The 4 walks in 140 games must be a record of some sort. He played 140 games, with Tony Fernandez starting to take over at short. He played 21 games at second base.

After the 1984 season Griffin was traded to the Oakland A's with Dave Collins for closer Bill Caudill. Caudill had one good season with the Jays and one lousy season but the trade worked out for the Jays because it cleared the way for Tony Fernandez to play short. Griffin played 3 seasons for the A's, leading off too much for the good of the team. His first season with the A's he won the Gold Glove in one of those ‘what the hell are they thinking' vote. He hit better for the A's then he had for the Jays, still not great but better than he had. After his 3 seasons in Oakland he was traded to the Dodgers.

For a pretty marginal player he had a long career, playing 18 years in the majors. Any player with 3 World Series rings has to be considered a success. He had a consecutive games played streak of 392 games that ended May 27, 1984. He is also remembered for his kamikaze base running style, scoring from 2nd on a fly ball or going first to third on a ground out or just as often getting thrown out trying to do the same.

He had one of the all time great Chris Berman nicknames: Fettuccini Alfredo Griffin. Bill James listed him as the 108th best shortstop of all time in his ‘New Historical Baseball Abstract'. Since the book is copyright 2001, he's likely to have dropped a number of spots since then.