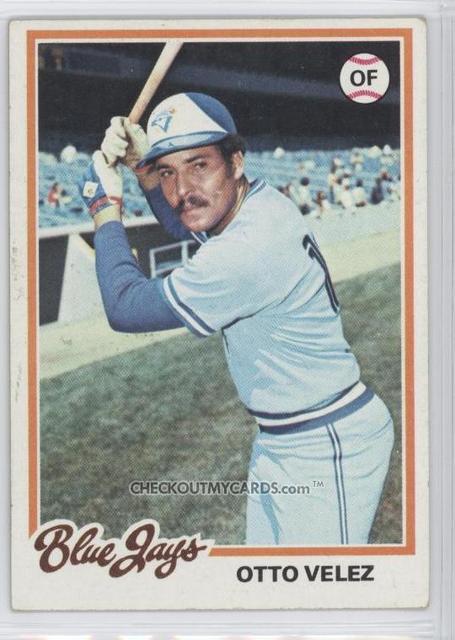 Otto Velez was born November 29, 1950 in Ponce, Puerto Rico. He was signed as an amateur free agent in 1968 by the New York Yankees. In 1973 he made it to the majors playing in 23 games as a September call up for the Yankees. For the next 3 seasons he played a handful of games for the Yankees but he was blocked from a full time job by the Yankee's fondness for signing free agents.

The Jays picked Otto up in the major league expansion draft in 1976. That first year the Jays were awful, finishing with a 54-107 record. Well to be honest they were an awful team for all the years Otto was with the team. But he was pretty good, in 1977 he hit .256/.366/.458 with 16 home runs and 62 RBI in 120 games. He had a good eye at the plate leading the team in walks. He mostly played right field that year and he was, well, terrible as a RFer. Rob Neyer says that Velez was the worst right fielder in team history and I can't argue that. He had little range and basically no arm at all. But the team had a 38 year old Ron Fairly and a handful of other guys that really couldn't field, so the DH spot was filled. A typical right handed slugger he crushed lefties.

1981, the strike year he had a poor season batting .213/.363/.404. When he was a young player he had old player skills and turning 30 those skills diminished quickly. 1983 he played in just 28 games and batter just .192 and was replaced at DH by Dave Revering and a cast of thousands. After the 1982 season the Jays released him and he signed with the Cleveland Indians. He played just 10 games for the Indians and that was the end of his major league career at 32.

There is very little information on the web about Otto. He coached the Puerto Rico National Team in the 1992 Olympics and the 1994 Baseball World Cup. And that's about all that can be found about his post major league life. If anyone has any more information about Otto Velez, let me know and I'll add it to this.