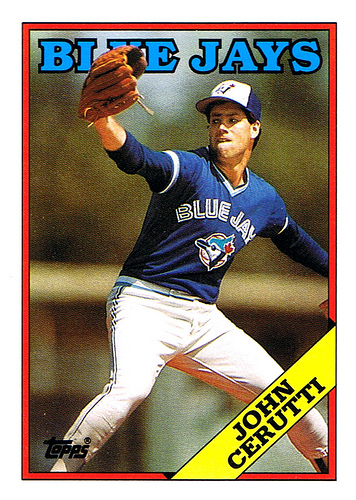 John Cerutti was born April 28th, 1960 in Albany, NY. He was drafted in the 1st round of the 1981 amateur draft out of Amherst College where he had a double major in math and economics. Despite his size, 6'2", 200lb, he wasn't a hard throwing, strikeout pitcher. He was a left-hander fly ball pitcher. He made the 1981 Pioneer League All-Star team in his first season of pro ball, pitching for the Medicine Hat Blue Jays, back when it wasn't a bad thing for the Jays to have their farm teams in Canada.

He was a September call-up in 1985, getting into 4 games starting 1, taking 2 losses. I'll just quote the story he told about his first appearance in the majors:

I was called up on 1 September 1985.  I didn't arrive until the fourth inning of the game because of the flight time and the CNE going on.  I got to the clubhouse and I got dressed in my uniform and went into the dugout.  I said hello to some of the players that I knew and BOBBY COX, the manager, said hello and asked me if I was able to pitch.  I said, "Yes", of course.  We were playing the CHICAGO WHITE SOX. I got the call to warm up in the seventh inning when JIM ACKER loaded the bases with no one out.  Before I knew it,  I was called into the game to face HAROLD BAINES, their third hitter and their best hitter.  STEVE NICOSIA was catching.  Steve had just joined the club from the MONTREAL EXPOS the day before and I had never met him.  So when I arrived at the mound, BOBBY COX said, "Welcome to the big leagues, kid.  Steve this is John.  John this is Steve."

I told Steve I threw a fastball, curveball and forkball, but we better just stick with the first two in this situation. He went back and called for a curveball and I threw it about five feet high:  ball one.  He called for another curveball and I made an adjustment and I bounced it:  ball two.  Now everyone knew I was going to throw a fastball, including HAROLD BAINES.  I reared back and threw a fastball down the middle of the plate and he foul tipped it back and it struck the umpire.  I threw a second fastball, a little bit higher, and Baines swung and missed:  2 -and- 2.  I threw another fastball, further up the ladder, and Baines swung and missed:  strike three.  Then finally I could breathe.

At that time, BOBBY COX was on his way to the mound.  I was thinking he was going to go over the next batter, CARLTON FISK. Before I realized it, he was calling BILL CAUDILL into the game.  It took me a moment to figure out I was being relieved.  As I walked off the field to a big ovation, I was thinking,  "I have struck out everyone I have faced in the big leagues and they are taking me out of the game."

In 1986 John appeared in 34 and made 20 starts. The Jays had a really good starting staff that year with Jimmy Key, John Clancy, Dave Stieb and Doyle Alexander, but the Jays traded Doyle to the Braves for Duane Ward in the middle of the season, opening a starting spot for Cerutti. John had a 9 and 4 record, with a save and a 4.15 ERA despite giving up 25 home runs in 145.1 innings. But 20 of the 25 homers were with the bases empty. He did not do well in Exhibition Stadium having a 5.12 ERA there while just 3.50 on the road. On July 2 he threw a record 4 wild pitches against the Red Sox.

In 1987 John again split time between the pen and the starting rotation. He started the season as a reliever, moved to the rotation and then when the Jays traded for Mike Flanagan for the stretch run, he was back in the pen. As much as I still don't like talking about the end of that season, it was the year the Jays lost their last 7 games, 4 of them to the Tigers, to finish just behind Detroit missing out on their first pennant. Cerutti finished 11-4, in 44 appearances, 21 of them starts with a 4.40 ERA. He also gave up 30 (!) home runs in 151.1 innings. With 59 walks and 92 strikeouts you can see why the Jays were unsure about having him in the rotation.

1989 was the season the Jays won their first AL East pennant and the season that Skydome opened. Cerutti had the Jay's first win at Skydome on June 7 after 2 losses, a complete game 2 run game. At that point of the season the Jays were 24-33 8.5 games back. Then the Jays got hot and finished the season 89-73, 2 games up on the Orioles for 1st in the East. John was 11-11 but pitched much better than his record showed. In 33 games he made a career best 31 starts, he threw 205.1 innings also a career best. And he kept his home run rate down only allowing 19. In the ALCS loss to Oakland, Cerutti pitched out of the pen, appearing in 2 games.

In 1990, the Jays fell to 2nd, 2 games back of the Red Sox. Cerutti started the season in the rotation and made 23 starts but went to the pen late in the season when Flanagan came off the DL. He finished 9-9 with a 4.76 ERA in 140 innings. His home run rate was back up again along with his ERA, giving up 23. After the season he signed with the Tigers as a free agent. He pitched 1 season for Detroit and then bounced around from team to team but didn't pitch in the majors again.

After his baseball career was over he went into broadcasting, becoming a commentator in 1993. In 1997 he started as the color commentator on the Jays games on CBC working with Brian Williams. In 2003 he moved over to Sportsnet. I remember him doing a very good job in that role, very knowledgeable with a good manner for TV. He was also an avid golfer and family man.

On the last day of the 2004 season he didn't show for the production meeting for the last Jays broadcast. Later he was found dead in his hotel room or a heart arrhythmia at 44 years of age. He left behind his wife, Claudia and three children Daniel, Nicole and Janine. In November, 2004 the Toronto members of the Baseball Writers' Association of America gave him it's annual Good Guy Award and then renamed the honor after him. No one seems to have had a bad word about him. He was a good pitcher and, from what people say, an even better man.