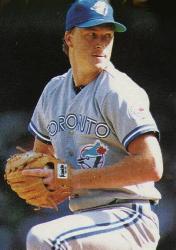 Timlin will always have a special place in my heart as he not only got the final out in the Jay's first World Series, he also made the assist on the final play, fielding Otis Nixon's bunt single attempt and throwing to Joe Carter at first just in time to get Nixon. And for that he gets to a place as one of my favorite players forever. Now he is battling Jeff Kent to see who will be the last member of that team in the Major Leagues.

Mike Timlin was born March 10, 1966 in Midland, Texas. He was drafted in the 5th round of the 1987 amateur draft out of Southwestern University. He skipped AAA ball, making the Jays out of spring training. He is your basic two pitch reliever throwing a two-seam sinking fastball and a slider or in Bill James words a great slider. His slider goes in on the hands of a right handed batter. He's always been a much better pitcher against right handed batters compared to lefties.

In 1991 Mike appeared in 63 games, starting 3 of them. He finished the season 11-6 with a 3.16 ERA and 3 saves. In 108.1 innings he gave up 94 hits and 50 walks, 6 home runs and struck out 85. His wins, innings pitched and strikeout numbers are all still career highs. He was tied for league lead in relief victories and got 2 third place votes for Rookie of the Year that season to finish 6th in the voting. Just to let you know how long ago that was, Chuck Knoblauch was the Rookie of the Year. The Jays made the playoffs that season and lost out to the Twins in 5 games. Timlin appeared in 4 of the games taking the loss in game 3.

1992 was the season noted above that the Jays won their first World Series. Timlin started the season on the DL after off season elbow surgery and rehabbed in the minors till June 12and then was optioned to the minors again July 31st. He didn't have a great season only getting into 26 games, finishing 0-2, with a 4.12 ERA. He pitched 2 in 2 game in the ALCS and 2 games in the World Series picking up the save in the 11th inning of the final game of the World Series.

Our second World Series season Timlin was an important part of our pen appearing in 54 games with a 4-2 record, 1 save with a 4.69 ERA. In 55.2 innings he allowed 63 hits, walked 27, and gave up 7 homers, so he wasn't terribly impressive. He pitched in 1 game in the ALCS against the White Sox and 2 scoreless appearances in the World Series win over the Phillies.

He didn't have a great season in 1994 making only 34 appearances with a 5.18 ERA. He went on the DL on May 27 with a sprained AC joint. After the All-Star break he had just a 2.38 ERA. 1995 he had more injury troubles, he gave up one home run all season, a grand slam on June 21 then went on the DL to have bone chips removed from his elbow the next day. He only allowed 1 earned run after returning from the DL August 18th. He did finish with his lowest ERA ever as a Jay 2.14 with 5 saves.

In 1997 Timlin made 38 appearances and was 3-2 with 9 saves and a 2.87 ERA when he was traded to the Seattle Mariners with Paul Spoljaric for Jose Cruz on July 31st. The Mariners were in a pennant race and needed bullpen help and were willing to trade Cruz their first round pick in the 1995 amateur draft. It was a great trade for the Jays and you'd imagine it would be when you trade two middle reliever types for a young power hitting outfielder. Though the Mariners did win their division and that season and Timlin did a good job for them for the next season and a half before leaving as a free agent after the 1998 season.

Since then Mike has played for the Orioles, Cardinals, Phillies and, for the last 6 years, the Red Sox, winning two World Series with them. Timlin is the only active player to have 4 World Series rings without having been a member of the Yankees, though I guess whether he will be an active player next season is still to be seen. If his career is over it's been a good one, 18 years in the majors and he has appeared in 1058 games, 7th on the all time list. In 2007 he was awarded the Lou Gehrig Memorial Award for ummmmmm oh well, I'm really not sure what for. ‘Given to the play who best exemplify his character and integrity both on and off the field'. I suppose it would be a bad thing to note that the bastion of integrity Pete Rose once won the award too. And Mark McGwire. Just saying.

Mike and his wife Dawn have 2 children Jake and Mykala. He does charity work for the Angel Fund which raises money for ALS research at the Massachusetts General Hospital and his wife ran the Boston Marathon in 2004, 2005 and 2006 in support of that charity. He enjoys hunting and golf, likely not at the same time. I guess the most important piece of information about Mike, at least to my youngest son, is that he once appeared on the cartoon show Arthur.