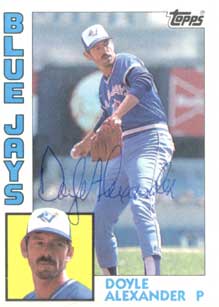 Doyle bounced around the majors playing for the Orioles, Yankees, Rangers, Braves, Giants, and Yankees again before the Jays signed him as a free agent June 21st, 1983 almost a month after the Yankees released him in May of that season. He had a real up and down career before he joined us, though he had a really good season with the Rangers in 1977 ending with a 17-11 record. After one relief appearance Doyle joined the Jay's starting rotation on July 12th. He made 15 starts for the Jays finishing 7-6, with 5 complete games and a 3.93. For a guy that was awful with the Yankees he really turned it around for us.

1984, his first full season as a Jay, Doyle had, likely, the best year of his career. He was 17-6 in 35 starts, 11 complete games and a 3.13 ERA, with the 4th best WHIP and 3rd most innings pitched in the league. He lead the league in winning percentage and even picked up an MVP vote that year. He only struck out 139 batters in 261.2 innings but he managed to get the outs when he needed them.

In 1985 we made the playoffs for the first time and Doyle was a big part in getting us there with a 17-10 record in 36 starts and a 3.45 ERA. Some of the good record might have been luck, he lead the lead with 8 wins in non-quality starts. Again there must have been some good defense played behind him to keep such a low ERA with just 142 strikeouts in 260.2 innings. Doyle was 6th in the Cy Young vote and 3 points in MVP voting tying him with Jay reliever Dennis Lamp for 21st in the voting. Alexander started 2 games of our 7 game ALCS loss to the Royals. He had a no decision in a loss in game 3 and took the loss in game 6. The playoffs didn't go well for Alexander in his career, he was on the losing side in all the series' he appeared in and was 0-4 in 6 playoff starts with an 8.38 ERA.

In 1986 Doyle made 17 starts for us going 5-4 with a 4.46 before being traded to the Atlanta Braves for Duane Ward. A heck of a trade for us, though we didn't do as good as the Braves did a year later when they moved Doyle to the Tigers for John Smoltz. That one is high on a lot of people's lists of worse trades ever, although Doyle helped the Tigers to a first place finish, just beating out the Jays, by going 9-0 for the Tigers down the stretch. That's when I learned to hate Doyle. But can't argue he wasn't a good pitcher for us, his Adjusted ERA+ with the Jays was 119 .

Like many soft throwers, Doyle threw a number of different pitches sinker, slider, change, 82-86 mph fastball, curve and occasional knuckleball and would change arm angles, mostly throwing straight overtop but throwing three-quarter or sidearm some. A fly ball pitcher he gave up his share of homers but normally solo shots.
Doyle pitched for the Tigers through the 1989 season when he retired after a 19 year career and a 194-174 record and a 3.86 ERA in 561 games. He is married to Pat (their 40th anniversary was in September) and has a son and a daughter.