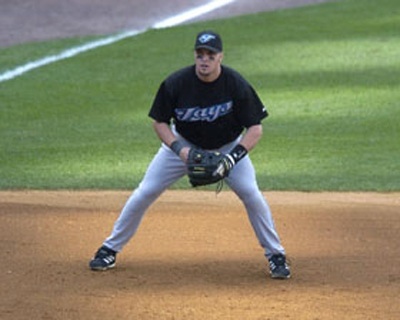 Yeah, I know, how can Hinske rate above Molitor? Well, Molitor was only with the Jays three seasons, two of which were strike shortened and his last season with us wasn't very good. Add in that Molitor didn't play a defensive position and well.....it was still a close call.

Eric Hinske was born August 5th, 1977 in Menasha, Wisconsin. Hinske was drafted in the 17th round of the 1998 amateur draft by the Chicago Cubs, from the University of Arkansas. Ty Wigginton was also chosen in that round of that year. So at the moment he's the second best third basemen/utility player of that round. JJ Putz and BJ Ryan were also picked in that round. That was a very productive 17th round.

In March of 2001 he was traded to the A's for Miguel Cairo and in December of that year he was traded with Justin Miller to the Jays for Billy Koch. It is safe to say we won that one.

2002 was Eric's Rookie of the Year season, he was terrific. 99 runs scored, 84 RBI, 24 homers, 77 walks, even 13 steals only being caught once: all career highs to this point. Most of those numbers set team rookie records, excepting the stolen bases. He hit .279/.365/.481 for an OPS+ of 119 also a career high. The only downside was his defense, he didn't show much range at third and made 20 errors for a .946 fielding average. His first game in the majors he had a 2 run single against Pedro Martinez. It looked like we had our third basemen for the next 10 years.

After the season JP signed Eric to a $14.75 million contract, 5 year contract, buying out his arbitration years. It seemed like a good idea at the time. In 2003 he hit only .243/.329/.437 for an OPS+ of 97 with 12 homers. He did get 45 doubles in 124 games and 12 steals in 14 attempts. His defense didn't improve either making 22 errors for a .930 fielding average. He missed a month of the season with a broken bone in his hand, which at the time was used to explain his lower offensive numbers.

Eric's 2004 season was, well, terrible. He hit just .246/.312/.375 in 155 games for a miserable OPS+ of 76, though he did have a 16 game hitting streak at one point. The lone bright spot was he cut down on his errors only making 8 errors for a .978 fielding average the lead the AL. After the season the Jays picked up Corey Koskie and Shea Hillenbrand to play third and moved Hinske to first base.

To start the 2006 season Hinske was moved into a platoon in RF with Alex Rios, but Rios is good and won the job outright in April. In June Rios went on the DL with a staph infection in his leg so Eric filled in while he was out and then Hillenbrand had a tantrum and was quickly traded opening a hole at DH for Eric.

Hinske was having a pretty good season for the Jays hitting .264/.353/.513 with 12 homers in 78 games, his best numbers since his rookie season when on August 17th he was traded to the Red Sox for cash.

In 2007 Eric won a World Series ring with the Red Sox and then in 2008 he was on the losing side at the World Series, making the last out for the Rays on a strikeout in only his second at bat of the playoffs. The other at bat was much more successful, hitting a home run in a game 4 loss.

As power hitting lefty, who can play a number of positions, HInske will likely find employment in the Majors for a few more years. He is married and has a daughter. He is a fan of have metal music and the Green Bay Packers. He is also, perhaps unfairly, immortalized on this site by having the Jay Suckage player of the Game award named after him. Sorry Eric.