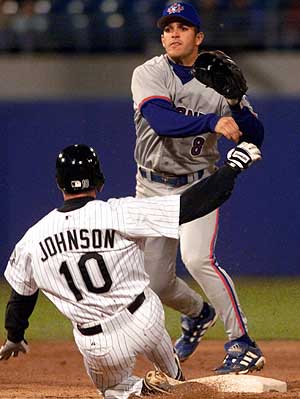 Alex Gonzalez was born April 8th, 1973 in Miami, Florida. He was drafted in the 14th round of the 1991 amateur draft. He turned out to easily have the best career of any player taken in that round of that draft. He rose very quickly thru the Jays minor league system and started the 1994 season as the Jay's starting SS at the age of 21 but after 15 games he had a .151 batting average and the Jays gave the job to Dick Schofield.

He was on Baseball America's Top 100 Prospects list 4 straight years moving to as high as 4th in 1994. To give you some idea Alex Rodriguez and Manny Ramirez were 6th an 7th on the list that year, though I doubt that Baseball America brags about that. He did have good power and speed potential with a terrific glove. The bat just didn't come around like they figured it would. He just never figured out how not to chase bad pitches and struck out way too much. And, to show they weren't alone in over-estimating him, in the 1995 Bill James Player Rating book Bill said ‘My guess is he'll be an All-Star'.

After the 2001 season, JP Ricciardi became the Blue Jay GM and wanted to cut salary and Gonzalez was traded to the Cubs for Felix Heredia and James Deschaine. He spent 2.5 seasons with the Cubs getting into the playoffs with them in 2003 losing out in the NLCS to the Florida Marlins. Gonzalez had a great NLCS hitting 3 home runs driving in 7 runs in their 7 game loss. But he also made the big error in the 8th inning of game 6 that allowed the Marlins to score 8 runs.

In 2004 he was traded to the Expos as part of the 8 player, four team trade that sent Nomar Garciaparra to the Cubs and Orlando Cabrera to Boston. He also played for San Diego, Tampa Bay and Philadelphia before retiring in 2006.

Omar Vizquel won the Gold Glove 9 years in a row from 1993 to 2001 but some of those seasons Alex really was the best shortstop in the AL, but getting Gold Glove voters to look at statistics isn't easy and if they did they wouldn't understand them. For a player that didn't hit well Alex had a long career in the majors, playing 13 seasons. Gonzalez was a favorite of female fans, "Marry Me Alex' signs often appeared at Skydome. Alex is married and he has two children. He does charity work for the Cystic Fibrosis Foundation.