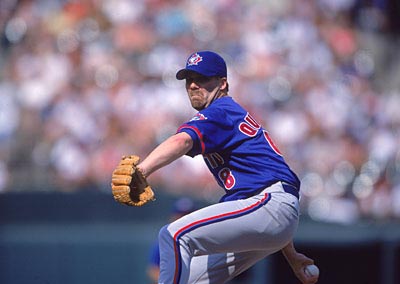 Quantrill quickly moved through the minors and made his Red Sox debut July 20, 1992. In May 1994 he was traded to the Phillies, where he played for the rest of that season and 1995. On December 6th, 1995 Gord Ash made likely his best trade of his time as Jay GM trading Howard Battle and Ricardo Jordan to get Quantrill.

His first year with us he started the season as a starter, making 16 starts in his first 17 appearances, at which point he was 4-9 with a 6.20 ERA so off to the pen he was shipped. By the end of the season we were well out of it and he finished the season in the rotation making 4 starts when Juan Guzman went on the DL after an appendectomy. It was a really awful season, in 134.2 innings he gave up 172 hits and an amazing 27 home runs. He walked 51 and struck out 86 to finish 5 and 14 with a 5.43 ERA.

In 1997 he was moved the pen full time. Rubber armed the pitched in 77 games (a record at the time for a Canadian pitcher) having one of the best seasons for a Jay set up man finishing with a 1.94 ERA (4th in the AL among relievers) and a 6-7 record with 5 saves. He gave up 103 hits in 88 innings but only walked 17 and 5 homers.

In 98 he made even more appearances (82) and had another great season with a 2.59 ERA and 7 saves and tied for the league lead in holds with 27. He had a reverse split that season holding lefties to a .258 average while righties hit .305 off him. But despite the high batting average hit against him he was an effective pitcher because he limited walks to 22 and homers to 5.

He missed the start of the 1999 season because of a broken leg suffered in the off season in a snow mobile accident. A true Canadian. He didn't pitch for the Jays until June 15th. He did still manage to get into 41 games. He had an off year in 2000 finishing with a 4.52 ERA in 68 game.

He made the All-Star team in 2001 leading the league in wins in relief with 11 and appearances with 80. He allowed only 5 unintentional walks in his 83 innings. He ended with a 3.04 ERA. After the season JP traded him and Cesar Izturis to the Dodgers for Luke Prokopec and Chad Ricketts. Yeah, not one of JP's better trades.

Over the next three years, 2 with the Dodgers and one with the Yankees he pitched in 86, 89 and 86 games. He made the playoffs in 2004 with the Yankees pitching in 4 games of the Red Sox come back, 7 game ALCS win over the Yankees. He took the loss in the 12th inning of game 4, the start of the Red Sox historic come back, giving up David Ortiz' walk off home run. . But all the pitching finally caught up to him in 2005 and the Yankees sent him to San Diego. After a couple of months the Padres released him and he signed with the Marlins to finish the season.

Quantrill pitched for Canada in the 2006 World Baseball Classic and retired after that. In a 14 year career he pitched in 841 games, the most games of any Canadian pitcher and had a 3.83 ERA. A skinny right-hander Paul threw a sinking fastball, a slider, change and curve. The sinker was his best pitch causing batters to pound the ball into the ground. Consistent and extremely durable Quantrill earns a spot on our list and was one of best relievers in team history.

Paul is married and has three children.