You're Like an Old Friend/Come and See Me Again 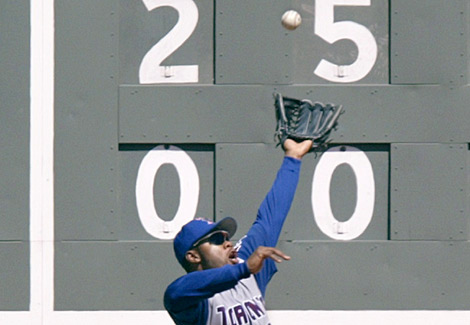 Gotta love Rancid. Following up on Quinton's earlier story, inside scooper Jeff Blair reports that the Jays have signed Shannon Stewart (no not that Shannon Stewart) to a minor-league deal.

Stewart, the Bluebird Banter #21 All-Time Greatest Jay, perhaps now has a chance to improve upon his standing (though for my money, he'll have a tough time passing the Terminator and Clemens).

According to Blair, Stewart's acquisition does not necessarily spell the end of Reed Johnson's time as a Jay, because Stewart's numbers last year were better against righties and because Johnson's expected use is as a platoon man against lefties. I'm not sure I buy that, because I just don't see how Stewart and Johnson would both fit on the Jays and get enough playing time. My guess is that either the Jays are very concerned about one of their recovering players and have signed Stewart as insurance, or Johnson is on his way out.

The main thing Stewart, who managed a .290/.345/.390 line last season with 12 homeruns and 11 steals in 14 tries would seem to bring over Sparky is money. Reed is signed this season for $3.275 million and if Stewart is signed at a minor-league deal, it is fair to say that it is substantially less than that, even with incentives. James has Stewart projected at .289/.349/.408 for 2008, while Johnson is projected at .276/.350/.391 (though could potentially do better if he has recovered fully and in a role where he mostly faces lefties), so the two are expected to offer extremely similar production levels.

To me, it seems like Johnson is the better fit for the Jays' needs this season. Stewart can still hit, but has had problems staying healthy and has slowed down due to injuries, with his defense notably in decline. Johnson is a solid defender who can play all three OF positions and hits lefties far better than righties. While Stewart, who has hit lefties and righties equally well over his career, offers a more balanced offensive attack, what the Jays would really seem to want is someone with strong splits against lefties, since Matt Stairs is prepared to ride a monster 2007 to the lefty half of a leftfield platoon. One way in which Stewart could be a better fit than Johnson is in the event of an injury to Overbay, Rios, Wells, Stairs, or Thomas, where Reed would be pushed into everyday duty. The problem I see with that reasoning is that Adam Lind would also offer cover for all those individuals, is a lefty batter, and could be ready to outplay Johnson or Stewart as early as this season. In the event of an injury, I'd rather see Lind get the call up than see either Reed or Stewart get increased at-bats against righties.

I understand Stewart could offer more cost-effective production since we're looking at a buyer's free-agent market, but given that fact, I can't imagine that Reed would fetch much of anything on the free-agent market. The Jays would have to trade Reed to avoid eating at least part of his salary, which is the only way they're going to make substantial book on this deal. Plenty of teams could use Reed, but the buyer's free agent market means that they're not going to necessarily be willing to give much up for him.

In addition, although JP has remarked that the Jays are strapped for cash, since the team has basically completed its roster and presumably won't be signing anyone else, I'd rather have Reed, who is 3 years younger than Stewart, plays better defense, and in his last healthy season, had a better season than Stewart has managed in quite a while. I guess the bright side would be no more Johnson hitting 1st or 2nd against righties, which isn't a great situation for the Jays, given his terrible career .267/.328/.383 line against northpaws, not to mention 4 times as many strikeouts as walks. But of course no one ever made the Jays do that anyway.