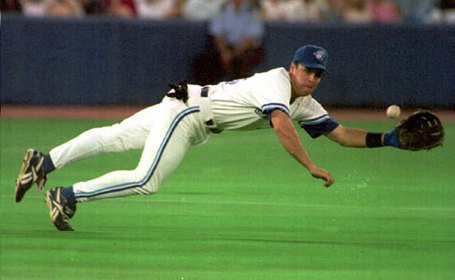 Ed Sprague was born July, 25, 1967 in Castro Valley, California. His father, also Ed Sprague, had been a pitcher for 8 seasons in the Majors in the late 60's and early 70's mostly as a journeyman reliever. That's what happens when you are poor, you get hand-me-down names. He played for 4 teams Oakland, Cincinnati, St. Louis and Milwaukee. Our Ed Sprague was drafted in the 1st round of the 1988 amateur draft, 25th overall out of Stanford University. Other notables taken in the first round that include Andy Benes, Greg Olson, Robin Ventura, Tino Martinez and former Jay Royce Clayton.

Ed was a star baseball player at Stanford helping them win the College World Series in 1987 and 88. He also won a Gold Medal in the 1988 Olympics in Seoul, South Korea, though baseball was just a demonstration sport that year.

In 1991 Sprague was called up in Early May to fill in for Kelly Gruber one of the several times he was injured and stayed with the team for the rest of the season playing some first base and catching in a couple of game. He did quite well hitting .275/.361/.394 in 61 games. He started 1992 in the minors and was called up in late July when Greg Myers was traded. He got into 22 games, mostly as a catcher. He also had a couple of at bats in the ALCS and in the World Series he had the moment that Jay fans remember him for; in game 2 he hit a game winning 2 run home run in the 9th inning off Atlanta closer Jeff Reardon, the biggest home run in the Jays history.....for about a year until Joe Carter hit the walk off comer to win the World Series. Without Sprague's homer the Jays would likely have lost game two and fallen behind 2 games to none. That would have been a tough hole to crawl out of.

Before the 1993 season the Jays traded Kelly Gruber to the Angels to open a spot for Sprague to play every day. And he did, playing third in 150 games, but not very successfully, batting .260/.310/.386 with 12 homers, not really good enough for a corner infielder. He also led the league in grounding into double plays with 15. But then we won our second World Series. Sprague hit well in the ALCS .286 with 4 RBI, he wasn't as successful in the World Series win against the Phillies batting just .067, but with just 233 games of Major League experience he had two rings.

In the strike/lockout shortened 1994 season Sprague hit a little worse than the year before finishing .240/.296/.373. The 1995 season also lost a few games to the strike; Ed hit slightly better .244/.333/.407 with 18 home runs and 74 RBI. One thing he was good at was turning into a pitch, he lead the league in being hit by pitch and most seasons he was near the top in of the league in that category. He was definitely not a great hitter for a corner infielder, but he played every day, unlike Kelly Gruber, the guy that played third before him. He was an amazing hitter with bases loaded that season having an 1.236 OPS.

Like Gruber before him, Sprague had one really terrific season that was out of way his norm. For Sprague it was in 1996. He set career highs in runs (88), hits (146), homers (36), RBI (101), walks (60) and slugging average (.496). It ranks as one of the best seasons ever for a Jay third baseman. Of course, it would be the winner of the ‘Which of these season's doesn't belong here' game when looking at Sprague's career.

There might be a reason for Sprague's terrific season; Ed admitted last year that he took steroids (androstenedione), it is possible that his sudden display of power came from a bottle. He also admitted using amphetamines, which were pretty common in baseball at the time. Baseball is played every day and players used greenies to fight against the fatigue a long season can cause. Amphetamines were banned by baseball in 2006. It is kind of refreshing to have a player admit to using steroids, since most deny, deny, deny, but then Ed isn't going to the Hall of Fame anyway so he was nothing to protect.

Ed played for 3 more seasons, making it to the All-Star game in 1999 as a member of the Pirates. He also played for San Diego, Boston and Seattle before finishing his career in 2001. He was a big slow right-handed batter and though he had a great arm he didn't have great range at third. Not a great player but had an 11 year Major League career and hit 152 homers, with 558 RBI. He could have used the ability to take a walk. If the Jays had left him as a catcher his career would have looked a lot more impressive.

Sprague wife Kristen Babb-Sprague won an Olympic Gold Medal in synchronized swimming in 1992. They have four children. He is a coach for the University of the Pacific Tigers; the next season will be his 6th there.