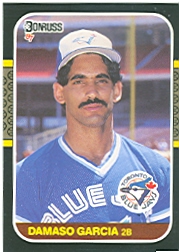 Notable Accomplishments: Silver Slugger: 1982, All-Star: 1984, 1985
Damaso Garcia was born February 7, 1955 in Moca, Dominica Republic. As a young man he was more into soccer than baseball, he was captain for the Dominican Republic's national football (soccer) team at the Central American and Caribbean Games in 1974. He was signed by the Yankees as an amateur free agent in 1975 as players from the Dominica Republic weren't included in the amateur draft.

Damaso got up to the majors for a few games in 1978 and 1979, but the Yankees had Willie Randolph and Garcia wasn't going to move him off second base. So the Yankees traded him, Chris Chambliss and Paul Mirabella to the Jays for Tom Underwood, Rick Cerone and Ted Wilborn, a trade that worked out pretty well for both team. The Jays quickly moved Chambliss to the Atlanta Braves.

The Jays had the very unimpressive paring of future Boston Celtic star Danny Ainge and Canadian Dave McKay at second base so Garcia was a big upgrade at the position. Damaso had an ok rookie season with the Jays, hitting .278/.296/.381. Well maybe not so ok, pretty poor really when you add in that he stole 13 bases but was caught 13 times and hit into 14 double plays. He did hit 30 doubles. And, inexplicitly, he finished 4th in the Rookie of the Year voting, getting 3 first place votes. It was a very thin rookie class that year, Joe Charboneau won the award that year, and he wasn't a great player. But still I can't imagine a player with Garcia's numbers getting votes today; we understand baseball stats much better now.

In spite of less than amazing numbers, he was voted the Silver Slugger award as the best hitting AL second basemen and he received some MVP votes. The Jays had a number of good young players at that time, a number of the pieces that would get them into the playoffs with Willie Upshaw, Alfredo Griffin, Lloyd Moesby, Jesse Barfield, George Bell, Jim Clancy and Dave Stieb they had some good players that would grow together to become a good team.

In 1983 had an almost equally good year hitting .307/.336/.390. He stole a few less bases (31) but was proving himself to be a decent middle infielder, though maybe illustrating his biggest weakness, he drew his career high in walks that year, with a whopping 24, not exactly what you would like from a leadoff hitter.

1984 saw Damaso's number fall off some, he hit .284/.310/.374 with 46 steals. He had a huge left/right split hitting .354 against lefties but .255 against righties. He had the large split each season of his career. But he made the All-Star team. Can you imagine a leadoff hitter with a .310 on base percentage making the All-Star team today? We had three players on the All-Star team that year, Dave Stieb started the game for the AL and Alfredo Griffin made the team, mostly because he travelled to the game with Garcia and when Alan Trammell was injured, well, Griffin was there, so they put him on the roster.

1986 was his last year with the team and he really wore out his welcome. He hit much the same as always (.281/.306/.375) but always a rather surly personality, he hit a new high in temper tantrums when, upset at being removed from the leadoff spot, that his friend Alfredo Griffin was traded in the offseason and that he had a bad game, had a little bonfire with some bats and his uniform in the clubhouse.

After the season Garcia was traded to Atlanta with Luis Leal for Craig McMutry. The trade didn't do anything for either team; Garcia was terrible in his few games with the Braves in 1988 after missing the whole 1987 season. Before the 1989 season the Expos signed him as a free agent and hit much like he always had in 80 games. After that season the Yankees signed him as a free agent but he didn't make the team and he retired after 11 seasons in the majors at 35.

Damaso had all the tools to be a really good player, he was good defensively but his refusal to take coaching or, you know, a walk, limited him. Bill James listed him as the 101st best second baseman in baseball history in his ‘New Historical Baseball Abstract'. And Rob Neyer lists him as the second best 2B in Jay's history, which is where we have him. At least until Aaron Hill has a couple more good seasons.

I like Ernie Whitt's quote "When he was healthy and wanted to play he was the best second baseman in the game. But there were days when (he) simply didn't want to play".

A year after he retired he was found to have a malignant brain tumor. He had surgery to remove it and after chemo he was told he had 6 months to live, but he couldn't pay his bill, so the doctors gave him another six months. Joke! Actually after further treatment he is living a normal life with just some minor effects to his speech and some movement problems. He has had a minor stroke in 2001.

Damaso is married with 2 children one of which has hemophilia, which causes blood not to clot. Damaso does charity work to raise awareness and funding for the disease in the Dominican Republic.