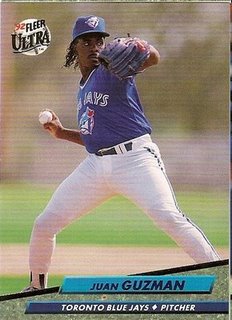 Juan Guzman was born October 28th, 1966 Santo Domingo, Dominican Republic. He was signed as an amateur free agent in 1985 by the Dodgers. The Jays traded Mike Sharperson to LA for him. One of the better trades in Jay's history, though Sharperson had some good seasons for the Dodgers. Pat Gillick was a terrific GM.

Juan was called up to the Majors in early June of 1991; the Jay's rotation was a bit of a mess behind the top three of Stottlemyre, Key and Wells. Dave Stieb was hurt and Denis Boucher didn't pan out and would be soon traded to the Indians along with Glenallen Hill and Mark Whiten for Tom Candiotti and Turner Ward.

Juan made his first start June 7th and stayed in the rotation the rest of the way. He was great, going 10-3 with a 2.99 ERA. He had 123 strikeouts in 138.2 innings, gave up too many walks (66) but kept the hitting to a minimum (98). He was equally great against left-handed batters (holding them to a .201 BA) as well as right-handed batters (.193 BA). He was second in the AL in Rookie of the Year voting to Chuck Knoblauch. We lost out in the ALCS to the Twins that year in 5 games. Guzman had our 1 win in game 2 of the series.

The next year he was in our starting rotation all season, though he missed most of the month of August with a strained back muscle. He was great once again with a 16-5 record and a 2.64 ERA in 28 starts. He struck out 165 in 180.2 innings, still giving up too many walks (72) but held opponents to a .207 BA. He was selected to the All-Star team and pitched a shutout inning in the game.

Of course more importantly, in the first of the Jay's back to back World Series wins. He won each of his 2 starts in the ALCS win over Oakland. In the WS he started game 3 but didn't get a decision, giving up only 2 runs in 8 innings of a game the Jays won in the bottom of the 9th.

In 1993 we won the World Series again and again Juan was a big part of our success, he was 14-3 in 33 starts with his highest ERA in his career to that point, 3.99. He still walked way too many, 110 in 221 innings. He also gave up more hits than he had in the past, giving up a .252 BA, which is pretty good still but not near as good as he had been his first two seasons. The trouble was a drop in effectiveness against left-handed batters who hit .282 against him, while righties hit just .223. And he was third in the league in strikeouts. He received a Cy Young Award vote. Two other Jay pitchers finished ahead of him in the voting, Duane Ward and Pat Hentgen. Jack McDowell from the White Sox won the award that year. But the writing was likely on the wall for his arm as he was allowed to throw 120 pitches or more in 12 starts. Cito never has been gentle with young pitchers.

Once again won his two starts in the ALCS, this time against the White Sox, but Dave Stewart won the Series MVP for his two wins. Really they had very equal series, Stewart gave up 3 runs in 12.1 innings, Guzman 3 runs in 12 innings. They each gave up 8 hits, Stewart walked 8, Guzman 9, Stewart struck out 8, Guzman 9. Juan also made two starts in the World Series, getting a no decision in a game one win and taking the loss in game 5.

Juan was lousy the next two lockout/strike shortened seasons with ERAs of 5.68 and 6.32 and a combined 16-25 record. He still walked more than a batter every other inning but he was giving up more than a hit an inning as well.

1997 was an injury filled season for Juan, he only made 13 starts with a 4.95 ERA and a 3-6 record. In 1998 Guzman made 22 starts for the Jays before being traded to Baltimore on July 31st for Nerio Rodriguez and Shannon Carter. Yeah we didn't get much for him but then he didn't do much for the Orioles before they traded him to the Reds on July 31st, 1999. He made 12 good starts for the Reds then signed with the Rays as a free agent before the 2000 season. He made 1 crappy start for the Rays and his shoulder was wrecked. That was the end of his career.

Juan had a pretty good 10 year career finishing 91-79 and a 4.08 ERA. He struck out 7.5 per 9 innings. He was wild, walked way too many and led the league in wild pitches in 1993 with 26 and 1994 with 13. He was slow and deliberate on the mound. He was very poor at holding runners. He threw a sinking fastball, rising fastball, slider and curve. Bill Mazeroski said he had "Incredible stuff and he's just wild enough for hitters to have that in the back of their minds'.