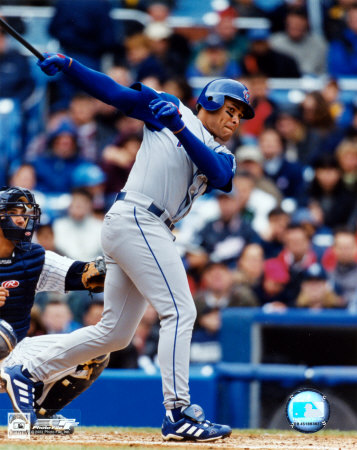 Jose Cruz, Jr. was born April 19, 1974 in Arroyo, Puerto Rico. His father, Jose Cruz, was a terrific outfielder for the Cardinals and the Astros, Bill James listed dad as the 29th best left fielder in major league history in the ‘New Historical Baseball Abstract'. His uncles Hector and Tommy Cruz also played in the majors. Our Jose Cruz was drafted by the Seattle Mariners in the first round (3rd pick overall) of the 1995 draft out of Rice University in Texas where he was a 3 time All-American. The two picked before him were outfielder Darin Erstad and catcher Ben Davis, right after him the Cubs took Kerry Wood. He had been picked by the Braves in the 15th round of the 1992 draft but decided to go to university instead.

Jose was your basic five tool player good speed, good defense, power, strong arm, good eye at the plate and on top of that a switch hitter. Like I said his dad was a heck of a player, maybe his dad wasn't as good defensively and but beyond that dad was a better player. A few years before the Mariners used their first round pick on another outfielder that had the same name as his major league father, Ken Griffey, Jr. That one worked out pretty good.

Jose zipped through the minors in less than 2 seasons. In late May 1997 he was called up to the Mariners. In 49 games with the M's he hit 12 homers and drove in 34. The Mariners were in the pennant race that year and their bullpen was awful. So to fix up the bullpen they made a pair of just terrible trades. The first one they traded Derek Lowe and Jason Varitek to the Red Sox to get Heathcliff Slocumb, a 31 year old journeyman reliever who had a 5.79 ERA at the time of the trade. Then they traded us Jose for Paul Spoljaric and Mike Timlin. Spoljaric had a 4.76 ERA after the trade that year then the next season his ERA 6.48. Timlin was much better for the M's saving 20 saves for them in his season and bit with the team. As much as it was a good trade for us, the Boston's trade has to be one of the best trades in baseball history.

Anyway Cruz continued his good rookie season with us, hitting a homer in his first game with us and finishing with 26. His batting average was just .248 but he had a OPS+ of 110 and finished second to Nomar Garciaparra in the Rookie of the Year vote. In 1998 he started the season with the Jays but was sent down to Triple A June 14th with a .214 BA. They recalled him on July 31 and he went on a tear hitting .366 with 5 homers and 28 RBI in August, bringing his average up to .253 for the season.

In 1999 Cruz again split time between Syracuse and Toronto. He played 106 games for us, mostly in center field. In 2000, he had his first full season with us, a really full season playing in all 162 games. He had a pretty good season, hitting just .242 but walking 76 times for a .323 on base and he hit 31 home runs. He scored 91 runs and drove in 76, hitting in every spot in the order but cleanup and 9th. With Carlos Delgado, Tony Batista, Brad Fulmer and Cruz we were only the 2nd team in baseball history to have 4 players with 30+ homers and also the 2nd team to have 7 players with 20 or more homers.

2001 was Jose's best season setting his career highs in runs (92), hits (158), doubles (38), home runs (34), RBI (88), steals (32), batting average .274 and slugging .530. The steals were a new part of his game; he had never before stole more than 15 and would never again. But he's one of only a bunch of guys to have a 30/30 season and only the second in Jay's history. Shawn Green was the first. The only part of his game that was off was his batting eye as his walks dropped to 45 and he had a career high of 138 strikeouts. He was voted Jay MVP by the Toronto chapter of the BBWAA (anyone else find it strange that there is a Toronto chapter of the Baseball Writers of America?).

2002 was his last season in Toronto and his numbers fell off quite a bit. Part of that was because of a month on the disabled list. The Jays moved him out of center field too, which was good as he really didn't have the range for center. After the season he signed with the Giants as a free agent. Since then he has played for the Diamondbacks, Red Sox, Dodgers, and Padres. Last season he had 49 at bats for the Astros. At the moment he's a free agent but likely he'll be retiring. He played for Puerto Rico in the World Baseball Classic in 2006 and had .353 with a .476 on base.

Cruz is married and has two sons. They lived in Bellaire, Texas at one point. If Bellaire sound familiar it is because former major leaguer Bobby Tolan's son Robert was shot in his driveway by police after getting out of his dad's SUV on New Year's Eve. Tolan was unarmed. Cruz has recently told the media why he moved away.

He and his family were in his new Mercedes and police stopped him because of a missing front license plate. They told him there were warrants out for his arrest and took him in. He ended up spending a night in jail and, of course, there were no warrants for him.

He had a pretty good career, 12 season, 204 home runs and 1167 hits. He was a pretty good fielder, not really good in center field but a good defensive corner outfielder, winning a Gold Glove in 2003 when he played with San Francisco. But he never quite lived up to what was expected of him. Unfortunately he never learned to cut down on his strikeouts, if he could have his batting average would have been some better and he would have what we hoped he'd be.