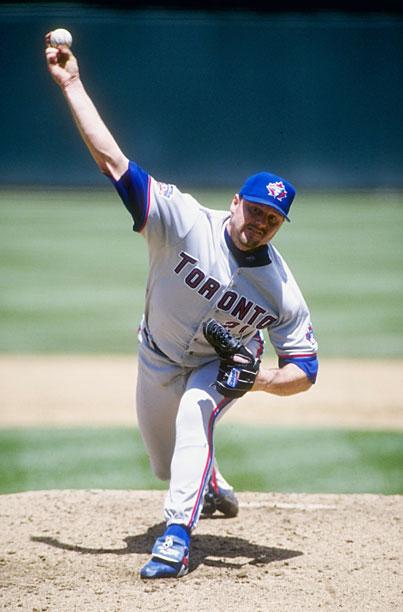 When I started this I had intended to limit the candidates for the list to players that played at least 3 full seasons with the Jays. But then Paul Molitor played great one full season, one great strike shortened season and one very average strike shortened season and he clearly deserved to be on the list. And now there is Roger Clemens who only had two seasons with the Jays. But then they were two off the charts amazing seasons, so he needs to be on the list too.

But where? Well, clearly with just two seasons he couldn't rate up with the best pitchers in Jay history but then he should be some above the Escobar/Stottlemyre/Alexander level. So for the sake of not spending days thinking about it, I decided to put him right in the middle of the list.

Might as well get the bad stuff out of the way right off the start; Clemens is mentioned 82 times in the Mitchell Report on steroid use in baseball. Did he start using in Toronto? He did seem to have a jump in performance when he hit Toronto. He met his soon-to-be personal trainer and later-to-be accuser Brian McNamee in Toronto. McNamee is known to be a supplier of steroids and human growth hormones. Clemens hired McNamee as personal trainer in 1997 his first year in Toronto. McNamee has stated that he injected Clemens with steroids. It seems beyond the normal suspension of disbelief to think that Clemens would hire a trainer that supplied steroids to others without using himself. I guess it is worth noting that Roger denies that he used steroids or human growth hormones. Of course Roger has denied a lot of things over the years and often those denials have rung more than a little false.

Early in Clemens career he was a little soft, he wasn't in the greatest of shape but he had strong legs that gave the power to his pitches. When he got to Toronto, well he wasn't soft and the stories about his fitness regiment started to appear in the papers. I'm starting to get the idea that news stories talking about workout regiments were writer's code for juicing. Anyway you can make your own conclusions.

On with the regularly scheduled profile; Rocket Roger Clemens was born August 4, 1962 in Dayton, Ohio. Roger moved to Texas in for time high school and starred in football, basketball and baseball. He went to the University of Texas and had 2 All-American seasons and helped the Longhorns win the College World Series. The Red Sox drafted Clemens in the 1st round of the 1983 amateur draft. Tim Belcher was drafted first that year and the Jays picked Matt Stark with the 9th pick, but then there are 18 teams that would have done much better had they picked Roger before the Red Sox had a shot at him.

Roger debuted with the Red Sox in 1984, he went 9-4 that season in 20 starts. His third last start he struck out 15 Royals without walking any in a complete game win. He was an amazing pitcher for his 13 years with the Red Sox winning 3 Cy Young awards and a MVP. He won 192 games tying the Red Sox franchise record for wins. But in his 4 last seasons with the Sox he was just 40-39 and Sox GM Dan Duquette said that he was in the ‘twilight of his career'. And while he wasn't, it did seem like a normal power pitcher hitting his early 30's and maybe losing a little of his stuff. Many power pitchers go thru the same thing about the same age, and a lot of them learn to pitch with less stuff and continue to have a good career. But Roger, he seemed to turn back the hands of time and reestablished himself as a power pitcher.

After the 1996 season the Red Sox weren't overly interested in resigning Roger so when the Jays offered him $24.75 million for 3 years to add to a rotation that already included 1996 Cy Young winner Pat Hentgen and Juan Guzman, well we had another ace. We did have a heck of a starting staff, but offensively we weren't all that great. GM Gord Ash traded John Olerud to the Mets because manager Cito Gaston thought that an aging Joe Carter would be better at first. Thankfully, Carlos Delgado took over the job, but then Cito used Carter and Orlando Merced, to block Shawn Green from the outfield. Add in the wonderful Otis Nixon playing center field instead of a young Shannon Stewart and we weren't the team we should have been.

In 1998 the team had a much better season finishing 88-74 in 3rd place in the AL East and Roger once again had an amazing season winning the Cy Young again, becoming the first pitcher to win it 5 times and he came in 11th in the MVP voting.. He led the league in wins, going 20-6, ERA (2.65) and strikeouts (271) for the second year in a row, only the four to win the pitchers Triple Crown in the history of baseball. Grover Alexander (1915-16), Lefty Grove (1930-31) and Sandy Koufax (1965-66) are the only others to do that. He finished the season with a 15 game win streak setting a Blue Jay team record and set another team record going 30 straight scoreless innings. He also got his 3000th strikeout this season.

So in his two seasons with us he was 41-13, but after the 1998 season Roger, wanting to get a World Series ring, asked to be traded. After some efforts to trade him home to Houston, Clemens was traded to the Yankees for David Wells, Graeme Lloyd and Homer Bush. The trade worked out for Roger, he got World Series rings in 1999 and 2000 with the Yankees. But it wasn't a bad trade for the Jays, we only were going to get one more season with Roger, David Wells pitched 2 seasons with us and won 17 games in 1999 and 20 in 2000 for a total of 37, those two seasons Clemens won only 27 games for the Yankees. Bush had a couple of good seasons for us and Lloyd was an effective lefty out of the pen for us in 1999.

After leaving the Jays Roger continued to a great pitcher, perhaps at a slightly lesser level of greatness. He won two more Cy Young awards and had a 121-60 in the 9 seasons since we traded him but he never has had a season with more than one complete game since.

Clemens has had one of the greatest careers in the history of baseball. He (likely, I'm taking it for granted that his career is over) finishes with a 354-184 record. He is 9th all time in wins, 3rd in strikeouts with 4672 and 7th in games started with 707. Bill James had him listed as the 11th best pitcher of all-time but that was in 2000, he's likely moved up a few spots since then. He would be a sure first ballot Hall of Famer if he wasn't for the steroid issue. There are a few years until he is on ballot and more information will likely come out between now and then, and maybe feelings will change about players that juiced.

Clemens has never been a favorite of mine. He comes off as a jerk. The denials of steroid use while pointing the finger at his wife for using HGH seem arrogant. And his reputation as head hunter, he is 10th all time on the hit batsmen list, make him even less likable. Add in the feuds with various players including the beaning of Mike Piazza in 2000 and then the rather bizarre moment in the playoffs that season where he threw a broken bat towards Piazza. On top of all that is the affair with a very young Mindy McCready (among others), well let's just say he's a creep and leave it at that.

All that said, he is clearly one of the 10 best pitchers ever to play in the major leagues and any discussion of who the best pitcher of the last 30 years would have to include Roger. And his two seasons in Toronto were as good as any in his career. His 1997 season was one of the handful of best seasons in the last 40 years.
Clemens is married and has four sons. One of the stranger stories about Clemens and performance enhancing drugs had to do with his wife getting injected with human growth hormones so she would look better for a Sports Illustrated swimsuit photo shoot. He has a charitable foundation the Roger Clemens Foundation that raises money for several children's charities.