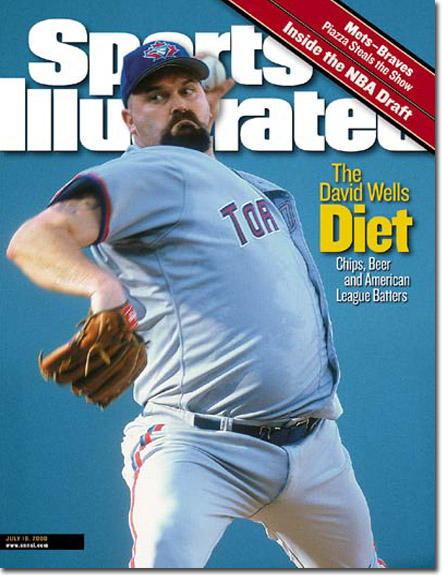 Notable accomplishment as a Jay: All-Star 2000

David ‘Boomer' Wells was born May 20, 1963 in Torrance, California, though I doubt he was nicknamed Boomer until later. He was drafted in the 2nd round of the 1982 amateur draft by our Blue Jays. Nine picks later the Pirates took Barry Bonds and later in the same round Bo Jackson and Barry Larkin were taken.

David Wells was a big, left handed pitcher 6'4" and he got bigger as the years went on. He was never a big fan of working out but he is a big fan of beer. It is kind of refreshing to go from doing a profile of Roger Clemens where steroids were at the center of the discussion to doing one on Wells who clearly didn't use steroids. I always felt that his lack of fitness would shorten his career but he was still pitching in the majors at the age of 44.

In 1987 Wells was called up to the Jays from Syracuse at the end of June, made two terrible starts and then was sent back down. He was called back to Toronto as a September call up and pitched well as a reliever. He earned a spot in the Jay's bullpen out of spring training in 1988, and made 41 appearances, saved 4 games with a 4.62 ERA. He was sent down to Syracuse in early July and then recalled late in the season.

1989 was David's first full season with the Jays and he had a heck of a year, pitching in 54 games, all in relief and finishing 7-4 with a 2.40 ERA. He started the season being used as a long reliever going 3 or more innings several times but as the season went on he was used more normally as a setup man. After the All-Star break he was 5-0 with a 0.90 ERA. He had 1 appearance in our ALCS loss to Oakland.

In 1990 Wells started the season in the bullpen but then was moved into the rotation in late May, after Mike Flanagan was released and stayed there the rest of the season. He made 25 starts and 18 relief appearances; he was 7th in the league in ERA at 3.14 and went 11-6.
Boomer started the 1991 in the rotation but was moved to the pen in September, after a bad stretch of 5 starts, all losses and an 8.89 ERA in those games. The Jays went to a 4 man rotation down the stretch. He had a very good season going 15-10 with a 3.72 ERA in 28 starts and 12 relief appearances. He also led the league picking runners off first, picking off 13, a total that was higher than 7 different teams. In our 5 game loss to the Twins in the ALCS, Wells had 4 relief appearances and a 2.45 ERA.

Our first World Series season, 1992, Wells started the season in the rotation, made two starts then Stieb came back from injury and Boomer went back to the pen. He returned to the rotation to make 12 starts from the end of July to the End of August, when Stottlemyre went down with an injury and then went back to the pen again when the Jays picked up David Cone. He didn't have a great season going 7-9 with a 5.40 ERA, though his ERA was ruined from a game on August 20th when Cito left him in a game to allow 13 earned runs to save the bullpen. He did pitch in 4 games of our World Series win over Atlanta, giving us 4.1 shutout innings.

During spring training of 1993 the Jays released Boomer. Why? Well apparently because Cito didn't like him. I can see that as a reason to trade a player, but to release him? He had to have some trade value. Cito, for all his good points, did tend to take irrational dislikes to some players. The Detroit Tigers quickly signed him and made him a full time starter. From Detroit he went to the Reds, then the Orioles and then to the Yankees. He had 2 good seasons with the Yankees going 34-14 with them and winning a World Series ring. He also became the 15th pitcher in major league history to throw a perfect game.

After the 1998 season the Yankees traded Wells, Homer Bush and Graeme Lloyd to the Jays for Roger Clemens. At the time I wasn't too happy about it, as even though Wells had pitched well the couple of seasons before the trade, but not at the level Clemens had. Add in that Wells was 36 and since he didn't take care of himself, I thought he wouldn't age well. But Boomer was terrific for us and Roger wasn't as terrific for the Yankees.

In 1999 Wells went 17-10 for us with a 4.82 ERA while setting career highs for innings pitched with 231.2, leading the league, and strikeouts with 169, a club record at the time for a lefty. He also led the league in complete games with 7, as well as hits allowed. But with his great control he could allow a lot of hits and still be an effective pitcher, and in 1999 he only allowed 2.41 walks/9 innings.

2000 was even a better season for David, finishing 20-8 in 35 starts, with a 4.11 ERA. He finished 3rd in the Cy Young voting and he started the All-Star game, pitching 2 shutout innings. He also received MVP votes. He tied with Tim Hudson for the league in wins, was 6th in ERA, second in innings pitched, 1st in complete games and shutouts as well as walk rate, only walking 1.21 batters per 9 innings. He was also the first Jay lefty to win 20 games.

After the season, Gord Ash showing why he shouldn't have been GM, traded Wells and Matt DeWitt to the White Sox for Mike Sirotka, Kevin Beirne, Brian Simmons and Mike Williams. Sirotka was injured at that time and never again pitched in the majors, Ash didn't make the trade contingent on a medical examination and MLB ruled against the Jays and upheld the trade. Ash was soon fired, but too late of course.

After pitching a season for the White Sox Boomer continued his tour of major league teams taking a second tour with the Yankees, then playing for the Padres, Red Sox, Padres again and finally Dodgers. For a fellow whose idea of working was basically a series of 12 ounce curls, he had a long career pitching 21 seasons and pitching in the majors till age 44. He made it to post-season play with 6 different teams.

Presumably finished his major league he has a 239-157, in 660 games, 489 of them starts. The Jays started off his career as a reliever which is a good way to get a pitcher into the big leagues, let them learn to pitch in low leverage spots, but the Jays couldn't seem to put David into the starting rotation and leave him there. Some of that was because Cito didn't like him and likely some of that was because he didn't feel the need to keep himself in shape.

He was big pitcher with great control, a great curve, an above average fastball early in his career, not so above average later, a slider and a changeup. Since he pitched into his 40's it is hard to say he would have had a better career if he kept himself in better shape. But then he has been diagnosed with Type 2 Diabetes so there are other reasons to stay in shape.

Wells has an ‘autobiography' called ‘Perfect I'm Not: Boomer on Beer'. Among other things in the book it said he pitched his perfect game with a hangover. He later said he was misquoted in the book, a strange claim for an autobiography.

Boomer is married and has two sons. He is kind of a cult hero for middle aged fat guys (no no, I'm not fat), but he does seem like the kind of guy you'd like to sit have a beer or two with. It is kind of cool that fat guys can be athletes too.