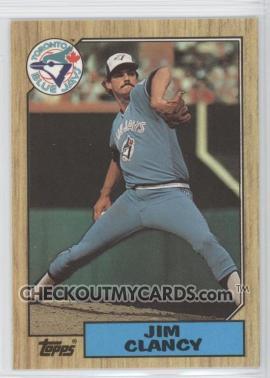 Jim Clancy was born December 18, 1955 in Chicago, Illinois. He was drafted by the Texas Rangers in the 4th round of the 1974 amateur draft, clearly the best pick in that round that year, Thad Bosley was the only other player to have a major league career of any note. The Jays picked him in the expansion draft of 1976. We did get a handful of useful players out that, including Ernie Whitt, Otto Velez and Garth Iorg.

Clancy was called up to the Jays in late July of 1977, our expansion season, and made 13 starts staying the rotation the rest of the way. The next year he was in the rotation from the start to the finish of the season, going a respectable 10-12 with a 4.09 ERA for a lousy team. He was our best starter, though he did have some control problems walking 91 in 193.2 innings. In 1979 Clancy started the year in the rotation but didn't do well, he finished 2-7 with a 5.51 ERA and spent much of the season in the minors.

Clancy spent most of the 80's battling with Dave Stieb for the number one spot in the rotation and number one spot on the team pitching leader list. 1980 was his first really good year, making 34 starts, finishing 15 of them, throwing a big 250.2 innings, walking still too many (128) but having a good ERA of 3.30, good for 10th in the league and 6th in strikeouts with 152. Think of how great it would be to have a pitcher like that behind Halladay in the rotation this coming season.

Clancy had a good season in 1985 after missing the first month of the season with an injury. He finished 9-6 in 23 starts with a 3.78 ERA. He made one relief appearance in our 7 game loss to the Royals in the ALCS and it wasn't good, giving up the winning run in the 8th inning of game three.

After the 1988 season Clancy signed with the Houston Astros as a free agent but he was pretty much used up. He pitched two poor seasons with them and then moved to pen pitching pretty well as a reliever for half a season before they traded him to Atlanta, where he got to pitch in the playoffs again.

Jim Clancy with a big guy 6'4", right-handed and a bull, he threw a ton of innings, many seasons for a really bad Blue Jay team. He and Dave Stieb exchanged the team lead in wins a number of times. For a while there Clancy and Stieb were our only decent starters. He was inconsistent, sometimes he would look like a power pitcher, sometimes a control pitcher, sometimes he'd rattle off a bunch of wins in a row then he'd lose a few. He was so close at times to being one of the great pitchers in the league but never quite got there. Likely on a better team,he'd have a few more wins and look that much better. He threw a fastball, slider, forkball and change from a ¾ arm slot and was good at holding runners. He was a power pitcher that didn't strike out many. He pitched for us for 12 years, longer than any other pitcher that started with an expansion team stayed with that team.

I couldn't find any information on where Clancy is now or what he is doing. I'd be curious to find out.