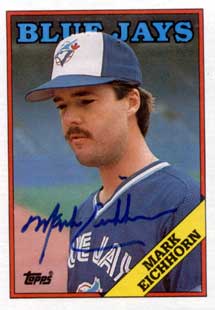 Mark Eichhorn was born November 21, 1960 in San Jose, CA. He was drafted by the Jays in the 2nd round, 30th overall, in the 1979 amateur draft, out of Cabrillo College, CA, where he played shortstop and pitched. He quickly rose thru the Jay's farm system and made 7 starts for the Jays as a September call up in 1982. They didn't go well, he went 0-3 with a 5.45 ERA and to make matters worse he suffered a shoulder injury. The injury cost him the speed off his fastball.

Returning to the minors he learned to throw submarine style in fall instructional league in 1984. As a right handed submarine pitcher, Mark threw likely the slowest pitches in the majors. He threw an extremely slow change-up, a ‘fastball' and a slider. And with releasing the ball from very low to the ground, coming from behind a right handed batter, he had a huge split in his stats, righties couldn't hit him at all, while lefties could hit him. In 1986, his return year to the majors and his best season as a Jay, right handed batters only hit .135/.186/.165 against him, while lefties went .259/.345/.434.

Mark, in 1986, had likely the best season ever for a Jay reliever. He pitched in 69 games, throwing an amazing 157 innings and finishing with a 1.72 ERA. Williams offered to let him pitch 5 innings in the season's final game so that he could have enough innings to get the ERA title, but he passed on it. Had he not missed a couple of weeks at the start of the season on the DL he would have likely had the ERA title. The Sporting News selected him as the Rookie Pitcher of the Year. Jay manager, Jimy Williams, used him often and generally for multiple innings, pitching as many as 6 innings in a game out of the pen and going 3 or more innings several times. And we thought Cito loved Scott Downs this past season. No star reliever would be used like that now.

It is hard to blame Williams for over using Eichhorn, when you have a 'get some shutout innings free card', you tend to use it. Mark was terrific finishing the '86 season 14-6 with 10 saves. He gave up only 105 hits in the 157 innings, striking out 166 while walking 45. He was 3rd in the Rookie of the Year voting, trailing Jose Canseco and Wally Joyner, and was 6th in the Cy Young voting. Rob Neyer rates this as the best season ever for a Jay reliever.

In 1987 Mark wasn't as good but still was very effective with a 3.17 ERA in 89 games, setting the Jays record for games pitched in a season. He won 10 games and saved 4 more as a setup man for Tom Henke. Even though he pitched in 20 more games than 1986 he pitched 30 less innings, though Williams still would have him out there for 3 or more innings on several occasions he also used him to get one or two right-handers out several times. Jimy used him as an all-propose reliever, sending him out there in any situation.Eichhorn made the most appearances and faced the most batters of any AL reliever. As always he had a large split with a .642 OPS vs. righties and a .760 OPS vs. lefties.

In 1988 he was on pace to get into a lot of games again but he suffered an injury in early June that kept him out till September. Baseballlibrary.com says that he altered his delivery to make it harder for runners to steal on him and that cost him some effectiveness. His ERA did jump to 4.19, but I would kind of think some of that was because of the number of innings he had pitched over the last couple of years. Since some of his effectiveness might have been due to batters not being used to his different delivery, with him pitching so much, batters may have been able to get comfortable with it and maybe had an easier time picking up the ball when he released it. And even throwing sidearm that much work has to cause some wear and tear on an arm.

After the 1988 season, feeling he had lost his effectiveness, the Jays sold Eichhorn to the Braves. After a pretty average season in Atlanta, the Angels signed him as a free agent. With the Angels he was again a very useful pitcher. After 2.5 good seasons with the Angels (he appears on Halos Haven Top 100 Angel's list), the Jays traded Rob Ducey and Greg Myers to get him back on July 30, 1992, just in time for Mark to get 2 World Series rings. He pitched 4.1 shutout innings, over 4 games, in the two post seasons.

In 1993, Mark's last season with us, he pitched in 54 games and had a 2.72 ERA. Cito started the season using him as a multiple inning reliever but as the season went on he was used more as a 1 inning or less late inning setup man. After the second World Series win he signed as a free agent with the Orioles. Near the end of a very good season with the O's he was injured and missed the whole 1995 season. He signed again with the Angels in 1996 but didn't do well. He bounced around in the minors for a bit after that, including pitching in the Jays farm system in 2000 but didn't pitch in the majors again.

One of the things I've always wondered is why we don't see more side arm/submarine type pitchers in the majors. The ones we do see have success; I think if I were a minor league pitcher that wasn't likely to make the majors I'd give it a try, or try a knuckleball. In the 70's and 80's Kent Tekulve and Dan Quisenberry were very successful submarine style closers. As a group sidearmer's tend to have very good control, but beyond that they don't have much in common. Some have been hard throwers, some have had great curves or sliders, some throw sinkers, Dan Quisenberry even threw a knuckleball for a while and Eichhorn got by with a slow slow change.

Sidearmers seem to be pretty durable and have, on average, had long careers. The most famous one may be Carl Mays who stands as the only major league pitcher to have killed a batter with a pitch. Likely the strange delivery had something to do with why Ray Chapman didn't pick up the pitch and get out of the way. There were a number of other factors, balls were used longer back then and tended to be dirtier. With no lights at the stadium, in late afternoon, the ball would have been hard to see. But, I digress a lot. Mays was a straight underhand pitcher who threw very hard, a very good starting pitcher, just short of being a Hall of Fame type.

Mark ended his career with a 3.00 ERA in 885.2 innings over 563 games. He is now a pitching coach for a high school baseball team in California. His son was drafted in the 3rd round 2008 draft by the Arizona Diamondbacks and pitched in their system last year. Mark coached his son's team that was featured in a documentary movie called Small Ball, A Little League Story in 2002. It was about their team trying to make the Little League World Series.

And, of course, Eichhorn was a personal favorite of mine, I always liked the guys with a different throwing style. He pitched a ton of good innings for the Jays and seemed like a good guy.