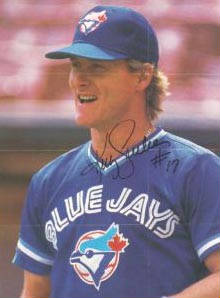 Kelly Gruber was born February 26, 1962 in Houston, Texas. He was drafted in the 1st round, 10th overall, of the 1980 amateur draft out of high school. The 1st pick that year was Darryl Strawberry, the Jays had the second pick and took Garry Harris (who?). Other notables in the first round of that draft include Terry Francona picked by the Expos and Billy Beane by the Mets.

Cleveland had Toby Harrah, a much better player, at third so the Jays were able to pick up Kelly in the 1983 rule 5 draft. He got into 15 games that season with the Jays mostly as a defensive replacement. In 1985 he got into 5 games as a September call up. In 1986 he spent the whole season in the majors playing in 87 games mostly as a defensive replacement playing third, second, short and the outfield.

1987 was the first season Gruber had a defined role with the team, taking over Garth Iorg's half of the third base platoon with Rance Mulliniks as well as getting in 21 games at shortstop. In short he was awful, hitting just .235/.283/.399 for a OPS+ of 77. He did have 12 home runs and 12 steals. Defensively he wasn't much better showing little range and making 11 errors for a .948 fielding percentage.

1989 was our first playoff season and Gruber was a large part of success despite a couple of trips to the DL, shades of things to come. Kelly got selected to the All-Star team and hit .290/.328/.448 with 18 homers and 73 RBI. Even his defense improved as he showed a bit more range. And on April 16th he became the first Jay to hit for the cycle. Gruber hit well in our 5 game lost to Oakland in the ALCS, hitting .294 and he even took 3 walks.

Kelly's last two seasons with the Jays were injury filled and his production suffered but they made the playoffs both years and he got to end his time with the Jays by winning a World Series ring. He didn't contribute much with his bat during their first World Series win, batting under .100 for the playoffs, though he did have a home run in each series, but he did add one lasting memory during the World Series. He ended what should have been a triple play with a diving tag of Deion Sanders' heel. But the umpire at second didn't see the tag. He also had an interesting slide into home during the Series where he drove his face into the ground trying to make it to home.

After the 1992 season Kelly was traded to the Angels for Luis Sojo. The Jays wanted to open a spot for Ed Sprague. The trade didn't help either team as Sojo only had 47 at bats for the Jays before leaving as a free agent after the 1993 season and Gruber only had 65 at bats for the Angels . Kelly's career was over at the age of 31 because of a bone spur near his spine. He tried a comeback with the Orioles in 1997 but it didn't work out. After a pretty good 10 year career Gruber finished with 117 home runs, 443 RBI and a .259 batting average. One thing I didn't know about him was that he hit better with runners on base than with bases empty every season with the Jays, a talent we could have used last year.

A 6', blond, good looking, happy go lucky fellow, Gruber was a favorite of the female fans. At one point he was voted Toronto's most eligible bachelor, but maybe not as big a favorite of the rest of the fan base as it all seemed to come a bit too easy for him and it seemed like he didn't work too hard to rehab from his various injuries. That might be a little unfair as the back injury was more serious than it seemed at the time. He was an extremely gifted athlete. Bill James had him ranked as the 103rd best third baseman of all time in his New Historical Baseball Abstract.

He must have some fans; he won our Best Third Baseman poll and he was also the subject of a pretty funny Kids in the Hall sketch. Gruber has written an autobiography ‘Kelly, At Home on Third'. And he won ‘American Superstars' in 1991 a sports TV show, where athletes from different sports competed in a series of athletic events. Baseball players rarely won on this show, as soccer and basketball players tended to be in better shape.

Kelly married his second wife Tonna in 1993 and they've had two children together and four from previous marriages.