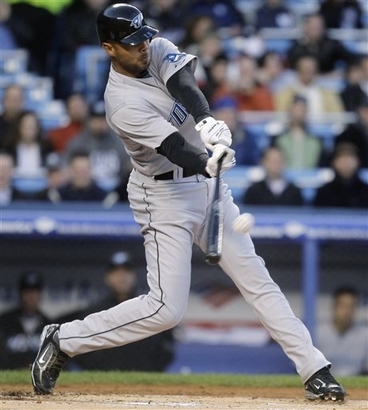 Alex Rios was born February 18, 1981 in Coffee, Alabama but moved to Puerto Rico when he was 3 months old. He was drafted in the 1st round of the 1999 amateur draft (19th overall) out of high school in Puerto Rico. Josh Hamilton was the first pick that year. Rios rose steadily through the Jays farm system showing a decent batting average on the way but not much power or much of an eye at the plate. A big guy (6'5") you'd have thought he would have been able to hit more than 11 home runs in a season in the minors.

Alex was called up to the Jays on May 26, 2004 when it was decided to move Reed Johnson to left to platoon with Frank Catalanotto . Alex played right field almost every day the rest of the season. He didn't do badly hitting .286/.338/.383 but with only 1 home run and an OPS+ of 85, I wasn't impressed, figuring a corner outfielder should have power and the potential didn't seem to be there. He did steal 15 bases but without the on base ability to be a lead off guy, I didn't see him as a star. Rios did show off a good arm finishing 4th in the league with 11 assists and good range in right.

Alex finished 5th in the Rookie of the Year voting. Bobby Crosby won it. Of the 4 that finished above him only Zack Greinke is someone you might consider trading Rios for. In 2005 he spent the full season with the Jays. Most of his numbers fell off from his rookie season except for home runs which jumped to 10. He hit just .262/.306/.397. With only 28 walks he looked even less like a corner outfielder. He didn't even steal bases as well, stealing 14 but getting caught 9 times.

Before the start of the 2005 season he played in the World Baseball Classic for Puerto Rico. Alex started the season in a platoon in right field with Eric Hinske, but Rios started hot and took the full time job. He had 15 home runs by early June and was named to the All-Star team. Unfortunately he didn't get to play in the game as he picked up staph infection in his leg, which landed him in hospital and cost him a month of the season. When he came back he was weakened (those staph infections are nasty things, ask Hugo) and his new found power disappeared.

2007 showed that 2006 wasn't a fluke setting new career highs in games (161), runs (114), homers (24), RBI (85), double (43) and walks (55). And made the All-Star team again and took part in the Home Run Derby, he had the most home runs in the contest but Vladimir Guerrero beat him out in the final round. Leading off a bunch early in the season he hit 4 lead off home runs. And he won the Fielding Bible Award as the best right fielder in the majors.

1, 10, 17, 24....can you guess the next number in this sequence. If you said 15 you win. With his home run numbers improving every season I was hoping 2009 would be the year Rios became a superstar, but it didn't happen. He had a good season batting .291/.337/.461, but his home run count dropped to 15 though he set a career high for homers after the All-Star break which bodes well for next year. What he did do well was hit doubles, setting a career high of 47, and steal bases, setting a career high of 32. I'd gladly trade the steals for homers.

This season Rios signed a 6 year contract extension for $64 million with an option for a 7th year so he'll be with us until at least 2014 by which time he could up in the top ten of our list, unless he is traded by then. He has a tendency to be a little lackadaisical at times, hopefully that will change as he matures.

Rios is single, rich, tall, dark and likely handsome (I am the wrong person to judge that). At 28 I'm hoping this coming season will be a big break out year for Alex, but then I was hoping for that last year. I'd love to see 30 home runs from him. The Jay's hopes to make the playoffs hinge on him becoming a MVP type soon. And he could become just that. If he doesn't find the power, I think he needs to become a center fielder somewhere. He likely should be anyway, he played a better center field last year than Vernon did, switching them might help Vernon stay away from injuries and improve our defense. He likely deserved a Gold Glove last season, hopefully he'll get one before his career is over.