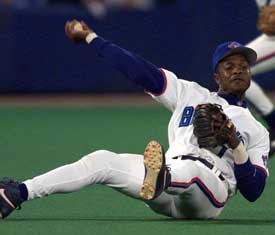 It's been a long time since the last one of these. I thought this one was jinxed for a bit. I wrote most of it once, saved it but it disappeared down a computer rabbit hole. Then I redid it and my computer froze when I was right near the end. Since I hate redoing things it took awhile.

Tony Fernandez (born Octavio Antonio Fernandez Castro) was born June30, 1962 in San Pedro de Macoris, Dominican Republic. He was signed as an amateur free agent by the Jays in 1979. The Jays, back then, scouted the Dominican pretty close; we signed a number of players from there.

Tony was called up to the Blue Jays when the rosters expanded in September 1983 and got into a handful of games. He was called up to the Jays for good at the end of May 1984, at first splitting team with veteran Alfredo Griffin and slowly taking over the position as the season went on. He also played some third base. A switch hitter, he had a pretty decent rookie season, hitting .270/.317/.356 in 88 games.

After the season the Jays traded Alfredo Griffin to the Oakland A's, along with Dave Collins for closer Bill Caudill and to make room for Fernandez. The trade didn't work out but making room for Tony did. Griffin was a pretty good defensive shortstop, but poor with the bat. Fernandez was an amazing acrobatic shortstop with a good bat.

In 1985 Tony played in all 161 games the Jays played, starting at SS in 158 of them and coming in as a pinch hitter in 3 others. He hit .289/.340/.390 mostly batting in the 9th spot in the order but near the end of the season they had him lead off a number of games. He scored 71 runs and drove in 51, with 10 triples. Not a great offensive season but for a team that was used to having Alfredo Griffin at short it looked good.

In 1986 Tony again played in all the Jays games, 163 that year. He hit at the back of the order again until early June when Jimy Williams finally decided having Damaso Garcia leading off with a .300 on base percentage might not be the best use of his players, Fernandez lead off for the rest of the year. Tony lead the league with 687 at bats, was 3rd in hits with 213, 5th in doubles (41), 10th in steals (32) and 7th in batting average (.310). It was a really good season for him. He was an All-Star, won the Gold Glove and was 14th in MVP voting.

Fernandez set career highs in batting average and on base percentage in 1987, hitting .322/.379/.426 in 146 games. He score 90 runs, drove in 67 and stole a career high 32 bases. He won his second Gold Glove, played in the All-Star game again and came in 8th in the MVP voting. 1987 was the ummm bad year where we lost our last 7 games to lose out on first play to the Tigers. As you likely remember Fernandez was injured when Tiger Bill Madlock slid (well really more a rolling block) into him while he trying to turn a double play. Fernandez broke his elbow and was out of the line up for the last 9 games. Losing him and Ernie Whitt cost us a shot at the playoffs.

We made it back to the playoffs in 1989. Tony hit .350/.381/.500 in our 5 game series loss to the A's. He also won his 4th straight Gold Glove, made the All-Star team and came in 19th in the MVP voting. On April 7 Tony was hit in the face by a Cecilio Guante pitch and missed almost a month of playing time with facial reconstruction surgery. Not one of your easy to watch hit by pitches. A very scary moment.

1990 was Tony's last year of his first tour with the team. Again he was very durable, playing in 161 games. He hit .276/.352/.381 and led the league with 17 triples. After the season he was part of the biggest trade of Blue Jays history, he and Fred McGriff went to San Diego for Roberto Alomar and Joe Carter. The trade worked out for us. Tony played in San Diego for 2 years and then was traded to the Mets after the 1992 season.

His time with the Mets start well and the Jays weren't happy with what they were getting from their shortstops early in the 1993. We tried Dick Schofield, Luis Sojo, Domingo Cedeno and even had brought back Alfredo Griffin, but none of them really could handle the job. Pat Gillick traded to get Fernandez back on June 11 giving the Mets Darrin Jackson.

After the season he signed as a free agent with the Reds and then played a season with the Yankees. He hit for the cycle on September 3, 1995 with the Yankees. In 1997 he made it back to the World Series with the Indians, but a 11th inning error in game 7 that helped lose the Series for the Indians.

The Jays signed Fernandez as a free agent in the off season before the 1998 season to bring him back for his 3rd stint with the team. He played 82 games at second base and 54 games at third base that year, hitting a terrific .321/.387/.459 scoring 71 runs and driving in 72, a career high till the next season. He came in 9th in the league in batting and on base percentage.

In 1999 Tony played third base and had one of the best offensive seasons ever for a Jay 3B. He hit .328/.427/.449. His batting average was 5th best and his On-Base % was 3rd best in Blue Jay history. He scored 73 runs and drove in 75. Unfortunately he also had what must be one of our worst defensive seasons for a third baseman. He had very little range and made 18 errors for a .939 fielding average.

Fernandez went over to Japan to play for the Seibu Lions in 2000. Then in 2001 he came back and played for the Brewers for a couple of months, got released and then signed with the Jays for a last go around where he played in 48 games, mostly as a pinch hitter and a DH. After the season he retired.

Rob Neyer in his Big Book of Baseball Lineups has Tony as our best shortstop in team history and, of course, our best fielding shortstop. Neyer also gives ‘Professor Gadget' as his nickname, for his ability to use anything at hand as a ‘strength-conditioning' tool. Bill James had him as the 24th best shortstop of all time in his New Historical Baseball Abstract.

He did have a reputation of being a little moody, though you never know, that seems to be one of those things people tended to say about Dominican players. White middle infielders are gritty, Dominican ones are moody. And he did have some troubles coming back to baseball after the pitch got him in the face. He didn't walk as much as you would like and his stolen base percentage could have been better. But he rarely struck out and was terrific defensively. If you look at our ‘Best Seasons for Jay Shortstops' list you see Tony Fernandez in the top 4 spots and in 7 of the top 10. He is also on the list of top seasons for third basemen.

He was always a favourite of mine, but then I like watching great defensive shortstops. He had a great ability to make that leaping jump-spin throw to first. I remember him smiling and happy on the bench but then he was generally quiet with the media, maybe it was a language thing.