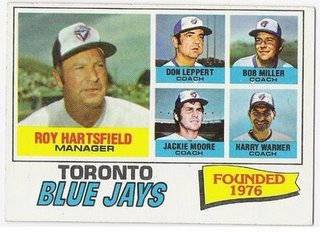 After his playing career he managed in the minors for several years, over 10 years in the Dodgers minor league system, but the Dodgers only used 2 managers from 1958 to 1996: Walter Alston and Tommy Lasorda, so there wasn't much room to move up. Then he managed for 4 years for the Hawaii Islanders, the Pacific Coast League, the San Diego Padres top farm team.

After his time with the Jays he managed in the minors again with the Reds and the Cubs but never made it back to the majors.

I don't much for memories of Hartsfield. No manager could have con with those players. His job was more teacher/place holder. Some of those early players did become good, some didn't.  Roy did have some player conflicts, but when you lose two out of every three games, odds are not everyone is going to be happy.

Happy Birthday Roy, hope you have a good one.