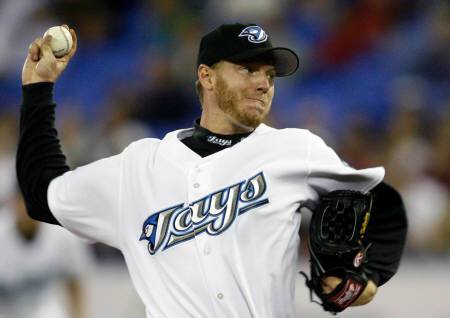 Roy Halladay was born May 14th, 1977 in Denver, Colorado. He was drafted in the 1st round of the 1995 amateur draft by the Jays out of Arvada West High School where he played both baseball and basketball. He was the 17th pick overall. Darin Erstad was the first pick that year. Other notables picked up before him were Jose Cruz, Jr., Kerry Wood, Todd Helton and Matt Morris. Michael Barrett was also picked at the end of the first round. I think we did pretty well with our choice.

More after the Jump.

Roy rose quickly through our minor league, Rookie League in 1995, High-A in 1996, Double and Triple-A in 1997 and Triple-A again in 1998. He was called up at to the Jays at the end of the 1990 season and made 2 starts for the team. You likely remember he started the last game of the season, against Detroit. He threw a 1-hitter, the one hit being a homer, with two out in the bottom of the ninth, just 1 out away from a no-hitter. We all knew we had something special.

In 1999 Roy spent the entire season with the Jays, splitting time between the starting rotation and the bullpen. He pitched in 36 games, made 18 starts, and had an 8-7 record with a 3.92 ERA. In 149.1 innings he struck out 82, walked 79 (not the strikeout to walk ratio that we would grow to expect from Doc), gave up 156 hits, and had one complete game a shutout. It was a pretty good season for a guy just 22 years old. He also got his one and only career save this season.

At the start of the 2001 season Roy was sent all the way down to A-ball Dunedin to ‘rebuild his delivery'. He worked with former Jay pitching coach Mel Queen and changed from a right over the top delivery to a ¾ arm one. It gave him more movement on his pitches. Watching him now it is hard to imagine that his pitches were too straight at one time, now he can't throw anything straight if he were to try. Mel Queen really deserves a lot of credit for helping Doc become the pitcher he now is. Roy pitched in A, AA and AAA that season on his way back to the majors.

Halladay made it back to Toronto in early July and made 16 starts for the team. His first start of the season he set a new career high for strikeouts in a game with 10. The new delivery made a world of difference. In 105.1 innings, Doc struck out 96, only walked 25, gave up just 3 homers for a 3.16 ERA. The promise he showed with the 1 hitter in his second major league start reappeared.

2005 was going much better, he was 12-4 with a 2.41 ERA and he made the All-Star team for the 3rd time and likely would have been the AL starting pitcher but a line drive off Kevin Mench's bat on July 8th ended his season. The ball hit him in the shin and broke his leg. Before the broken leg he was the odds on favorite to win the Cy Young that year.

He came back strong in 2006, going 16-5 with a 3.19 ERA in 2 starts. He made the All-Star team again and finished 3rd in the Cy Young voting. He missed a few starts with shoulder soreness at the end of the season.

Also, in 2006, Doc signed a 3 year, $40 million contract extension, keeping him under Blue Jay control until the end of the 2010 season. As much as people like to rag on J.P. Riccardi for some of the contracts signed under his watch, but this has to be one of the best contracts ever. Doc has easily been worth at least double what he's been paid. Had he gone to free agency he would have signed for a lot more money and at least twice the number of years.

In 2007 he went 16-7 with a 3.71 ERA. He missed the All-Star team but finished 5th in the Cy Young voting. He led the league in complete games with 7.He missed time going onto the DL after an appendectomy in May.

In 2008 Doc won 20 games for the second time, winning number 20 in his last start of the season, a complete game shutout of the Yankees. He and Roger Clemens are the only Jay pitchers to win 20 more than once. He lost just 11 games. Winning 20 games with the crappy offense we had is pretty amazing. He led the league in innings pitched with 246 and complete games with 9, though with our wonderful offense he lost 3 of those games, in 3 consecutive starts at the end of April. He stepped up his strikeout rate that year too, jumping to 7.5 strikeouts per 9, likely due to relying more on his cut fastball than he had in previous years. Before this jump in strikeouts there was some worry that his strikeout numbers were dropping to the range where he couldn't keep continue to be one of the elite pitchers in baseball. He came in 2nd in the Cy Young voting to Cliff Lee. He was struck in the head with a line drive on June 20th in Pittsburgh but he didn't miss a start because of it.

This past season started out terrific again for Doc, he was 10-1 after 13 starts and pitched at least 7 innings in each one of those starts. Then in his 14th start he strained his groin. When he came back from the injury he wasn't quite the same, losing 7 of his next 10 decisions. But he turned it around again in September going 4-2 with 4 complete games. He started the All-Star game but gave up 3 runs in his 2 innings.

And, of course, he had to deal with trade rumors for the month of July. Trade rumors are starting up again. I'm hoping he'll still be part of the team at least until I finish writing this.

Roy is married to Brandy (she's a fine girl, a good wife she would make) and they have 2 children. They do a lot of charity work, they run ‘Doc's Box', where they invite children from the Hospital for Sick Children and their families to watch games at Rogers Center and Brandy seems to head every charity drive the team runs.

Doc is just terrific to watch pitch and his professionalism is a great example for the other pitchers on the team. If/when he is traded or leaves the team as a free agent I'll be very sad. He has been the Jay's opening day starter 7 years in a row and it will be strange seeing someone else take that honor.