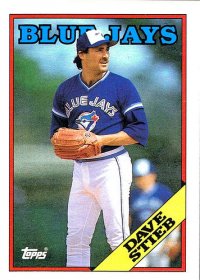 Dave Stieb was born on July 22, 1957, in Santa Ana, California. He was picked by the Jays in the 5th round of the 1978 draft out of Southern Illinois University. That was just our second year as part of the draft, in the first round, in the first round, with the second pick overall we picked up Lloyd Moseby. They were the only two we picked in that year's draft that made any impact in the majors. Of course in our first draft we only got one guy who helped the team; Jesse Barfield, a 9th round pick (well there was Danny Ainge in the 15th round).

At University he was a center fielder and only occasional emergency pitcher. His first year in the minors he did play some outfield but he didn't hit and the Jays quickly made him a full time pitcher. He was, very occasionally, a pinch runner for the Jays and played a couple of innings in LF one year.

In the strike shortened 1981 season, Stieb had his first winning record, going 11-10 in 25 starts, 11 complete games and a 3.19 ERA and he made the All-Star team for the second straight year.

Dave's last good season was 1990, he went 18-6 with a 2.93 ERA. He made the All-Star team and came in 5th in the Cy Young voting. But the big moment for him was September 2, when he finally got his no-hitter, the first no-hitter in Jay's history (well we were no-hit 3 times). Up until then Stieb had been snake bit in no-hit attempts. Three times he took a no-hitter into the 9th and lost it with just one out left, 2 of them in consecutive starts in 1988, then in 1989 he lost a perfect game with 2 outs in the ninth.

Stieb had back and shoulder problems in 1991 that ended his effective pitching. He made it to 4-3 with a 3.17 ERA in 9 starts before the injuries ended his season. In 1992 he made 14 starts and 7 relief appearances but didn't do well: 4-6 with a 5.04 ERA. That was the year we won our first World Series. Even though Dave didn't have a good year it's great that he got a ring with us, after suffering through the lousy years. After the season he signed with the White Sox but the injuries didn't allow him to perform.

After being away from baseball for 4 seasons, Stieb attempted a comeback with the Jays in 1998. The plan was to make him closer and he did get 2 saves in 19 relief appearances, he also made 3 starts. He finished with a not so terrible 4.83 ERA but retired for good after that year.

Stieb wasn't exactly a nice fellow on the mound. If a teammate made an error behind him he would glare at them. He didn't exactly endear himself to his teammates. He led the league in hit batters 5 different times. He wasn't a very modest player, he'd be happy to tell you how good he was, but then he could back it up. He would talk, loudly, to himself on the mound. The nice way to say it is that he was a perfectionist. Many great pitchers were.

Not a big guy, listed as 6' and 195 pounds, Stieb threw a slider, a sinking fastball, a high fastball, a curve and a changeup. He wasn't overpowering but would throw any of his pitches for strikes. He was athletic, a good fielder and was great at holding runners. A ground ball pitcher. For a few years Stieb and Jim Clancy battled it out for the franchise lead in Wins.

Dave Stieb is listed as the best pitcher in Jay history in Rob Neyer's Big Book of Baseball Lineups; of course the book came out before Roy Hallday become great. Bill James listed him as the 74th best pitcher of all-time in his "New Baseball Abstract". Only Jack Morris won more games in the 70's. He is on our "Level of Excellence" at Rogers Center and is a member of the Canadian Baseball Hall of Fame.

Dave had an autobiography called "Tomorrow I'll Be Perfect", a copy of which is somewhere around this house, and he is immortalized in Hugo's song "Skydome".

He is married and has 3 children.