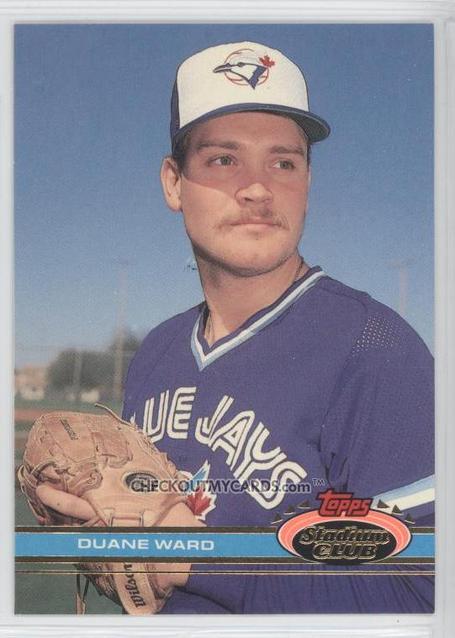 Duane Ward was born May 18, 1964 in Park View, New Mexico. He was drafted in the first round of the 1982 amateur draft, 9th overall, by the Atlanta Braves, out of high school. Dwight Gooden was picked 4 spots before him. A big (6'4") right hander Ward struggled as starting prospect in the Braves system, having big time control issues walking 5 per 9 innings without getting the strikeouts the way he would later. On July 6, 1986 the Jays traded Doyle Alexander to the Braves for Ward. Doyle was a pretty good starter but is safe to say we won that one.

For the next four seasons Ward was the setup man for Henke and man were they great together. Duane improved in the role each year having ERAs of 3.77, .3.45, 2.77 and 1.95. He wasn't used like setup men are used now; he would pitch multiple innings and he got to double figures in saves each season, with a high of 23 in 1991. He had a very high strikeout rate getting up to 11/9innings in 1991 and he lowered his walk rate. He was a heck of a pitcher and came in 9th in Cy Young voting in 1991.

After the 1992 season Tom Henke left the team thru free agency and Duane was given the closer job. He was great, saving league leading 45 games, striking out 97 in 71.2 innings with a 2.13 ERA. The 45 saves are still the most saves in a single season in Jay's history. When you strike out 12.2 per 9 innings and just give up a .182 batting average you know you are doing good. He also made the All-Star team, was 5th in Cy Young voting and received MVP votes.

Duane missed the whole of the 1994 with a torn rotator cuff. He tried to come back in 1995 but after 4 appearances his career was over at 31. He was a great pitcher for 6 seasons but he threw a lot of 95 mph fastballs and hard sliders over those years and he wasn't used a one inning pitcher and he would pitch 80 games a year.

Rob Neyer rated him our second best reliever in team history. He runs the "Duane Ward Baseball Clinic" and does motivational speeches.