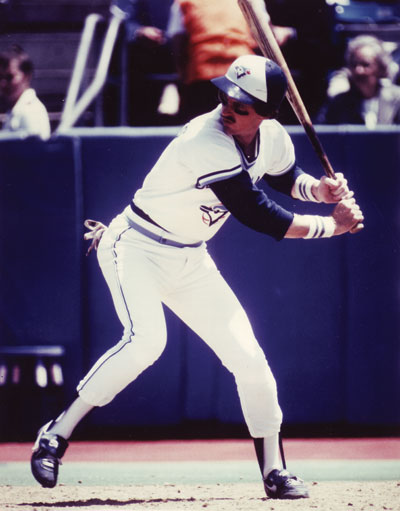 Rance Mulliniks was born January 15, 1956 in Tulare, California. He was drafted in the 3rd round of the 1974 amateur draft out of high school. He moved quickly thru the Angels minor league system and was called up to the Angels in June of 1977 and was the regular shortstop for the rest of the season. He was ok but that next couple of seasons he didn't play much and was traded to Kansas City before the 1980 season. After two more seasons and very little playing time there he was traded to Toronto for pitcher Phil Huffman. Another trade we won.

In 1982 we didn't have an obvious choice to play third base so manager Bobby Cox took a left-handed hitting back-up shortstop (Mulliniks) and a right-handed hitting back up second baseman (Garth Iorg) and turned them into a platoon at third base. It really was a good move, it took two players that really didn't have a role, Mulliniks who really wasn't a good enough defensively to play short and Iorg who wasn't good enough offensively for a full time job at any position. So putting them together and getting the most out of their strengths while minimizing their weaknesses was a smart move. Over time we got decent production out of the position while not spending a lot of money. No wonder Bobby Cox is going to the Hall of Fame.

Rance never really had the power that you would like from a third baseman but he made up for that by having a good batting eye and keeping high on base percentages for the rest of his career. The next couple of years he had very similar seasons having OPS+ of 124 and 125 in 1984 and 1985. 1985 was our first time in the post season and Rance did well in our 7 game ALCS loss to the Royals. He hit .354/.462/.727 with a home run and 3 RBI.

1986 was the last season for the Mullinorg combination as Kelly Gruber shared time at third with Mullinicks in 1987. Rance continued to be effective batting .310/.371/.500 in 1987. In 1989 Gruber took over the third base job full time and Rance was moved over to a platoon DH with Cecil Fielder. Being the left-handed hitter in a platoon is the better part of the jig since you get the lion's share of the at bats. In 1988 Rance had the best offensive season of his career hitting .300/.385/.475 and setting career highs with 12 homers and an OPS+ of 143.

1989 Rance saw his offensive numbers drop off big time, he had an OPS+ of just 88 and he had just 1 at bat in our 5 game ALCS loss to the A's. In 1990 his role on the team changed again, he became a pinch hitter. In 1991 he was back in the DH platoon with Pat Tabler. He didn't do well, with a OPS+ or 80. And, in 1992 he missed all of the season with a disk problem in his back; except for 3 at bats as a pinch hitter in September. And that was the end of his career.

Mulliniks was clearly the better half of the Mulliniks/Iorg platoon and, likely, should have been given the full time job at third after the first year or the platoon. Rance hit for better average, power, took more walks and played at least as good defense.

I'll admit Rance always was a favorite of mine; he seemed to me to be a player that got the most out of his limited talent. How could I not like? I mean Rance isn't a big guy, not a power guy, not overly fast, didn't really make the acrobatic plays in the field. He hit left-handed, wore glasses, kind of an average sized fellow, more than a little geeky looking. Darn near like cheering for myself, and yet he made himself into a valuable major league player.

Rance has been the color commentator for the Sportsnet Blue Jay coverage the last couple of seasons. He's very knowledgeable but he bothers me by talking way too much and saying the same things too much. He seems scared to allow some dead air to pass for a moment. But then he is far better than Jesse Barfield. I truly hated the CBC broadcasts last season with both Rance and Jesse, they seemed to be fighting to be the one that talked the most.