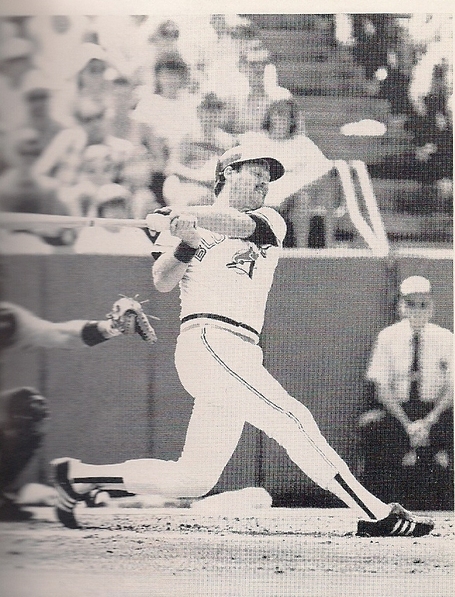 Ernie Whitt was born June 13, 1952 in Detroit, Michigan. He was drafted in the 15th round of the 1972 amateur draft by the Boston Red Sox. He was chosen one pick before Jason Thompson who was a terrific first baseman for the Tigers and Dodgers. Ernie was blocked from making the Red Sox by Carlton Fisk and was left unprotected in the 1976 expansion draft and we grabbed him up.

In the strike shortened 1981 season the Jays picked up Buck Martinez who would become Whitt's platoon partner for the next several years. Whitt again didn't hit well, just .236/.307/.297 with just 1 home run.

In 1984 Ernie continued the power hitting with 15 homers in 315 at bats. In our first playoff year, 1985, Whitt set a new career high for homers with 19 hitting .245/.323/.444 in 412 at bats and he made the All-Star team. But he didn't do as well in our 7 game ALCS loss to the Royal, he hit just .190. Whitt started every game of the series against both left-handed and right-handed pitchers, as Martinez was injured (likely most of you remember that play, where he broke his leg and dislocated his ankle, and still tagged out the runner at home afterwards) and Jeff Hearron was the back-up catcher for the series.

Whitt continued to be a very consistent player in 1986 he hit 16 home runs. Before the 1987 season Buck Martinez retired and Charlie Moore became Ernie's catching partner. Whitt hit 19 home runs for the second time in his career setting a career high in RBI with 75 and a career high of 24 doubles and hits with 120 with batting .269/.334/.455. 1987 was the season we fell apart at the end and allowed the Detroit Tigers to pass us for first place. Whitt missed the end of the season with a rib injury. Had he been able to play we likely wouldn't have been passed by the Tigers.

After the season Ernie was traded to Atlanta with Kevin Batiste for Rick Trlicek to clear room at catcher for Pat Borders and Greg Myers. He played in Atlanta for one year then played for Baltimore for part of 1991 and his playing career was over. For a guy who only got into 33 games before his 28th birthday he had a terrific career. Ernie never had 300 at bats in a season till he was 31. He was amazingly consistent; from 1983 to 1989 he had OPS+ numbers ranging from 104 to 121, on base % from .323 to .349 and slugging averages from .410 to .459.

He had a good career, playing 1328 game over 15 seasons and hit 134 home runs. He finished up with a .248/.324/.410 and 534 RBI and was a good defensive catcher with a decent arm. Our first manager Roy Hartsfield told didn't think Whitt could make it as a major leaguer. Whitt proved him wrong. He had the longest career with the Jays of any player that played in our first season.

Whitt was a favorite of mine. I loved his all out pull swing. Often he would end his swing on his left knee; he'd swing right off his feet. Actually, if you watched him swing you would have sworn he couldn't have hit the ball at all. His back knee would drop and drag on the ground, his bat should also have dropped and he should have swung under the ball, but he had such open stance he could see the ball really well and, well, he was smart. He was a catcher and he was a guess hitter. And as a smart catcher, he was a very good guesser. Fool him he'll miss the ball, but he didn't fool easy.

He wrote a biography called ‘Catch: A Major League Life' (which I have somewhere around the house). One of the controversial things he said in the book was that umpire Joe Brinkman was ‘incompetent'. Another thing he said in his book was that he shouldn't have been just a platoon catcher. He was wrong. In his career he hit just .223/.303/.311 against left-handed pitchers.

Rob Neyer, in his book "Big Book of Baseball Lineups" has Whitt as our all time best catcher and really he is by far the best catcher we've ever had. He also says Whitt played the best defense of any catcher we had. Bill James in his "New Historical Baseball Abstract" has Whitt ranked as the 72 best catcher of all time. He likely would be moved down a few spots since the book was published. He was arguably the most popular player among Jay fans when he was with Toronto. He played the game hard and did a ton of charity work in during his off field hours.

Ernie had been the Jay's bench coach then the first base coach starting in 2005 and was first with John Gibbons and most of the rest of the coaching staff in June of 2008. Whitt burned bridges behind him by ripping JP Richardi afterwards and calling himself the ‘best manager the Jay's never had'.

Whitt has been the manager of the Canadian national baseball team since 2004 and will be again at the World Baseball Classic this spring. He will be inducted into the Canadian Baseball Hall of Fame in June of this year.
Whitt, like Rance Mulliniks just after him on the list, got everything off of his ability. You have to admire someone like that. He wasn't' a hot prospect in the minors and didn't show power till he was in his 30's. Ernie Whitt is married and has 3 children.