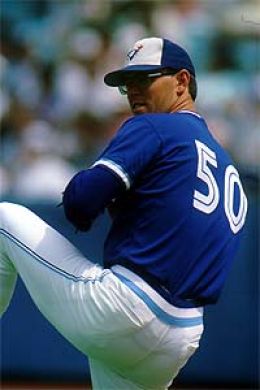 Notable Accomplishments as a Jay: All-Star 1987

The Jays got him as compensation for the Ranger's signing of Jay free agent Cliff Johnson. At the time teams that signed another team's free agent gave up a player to the original team. A team would protect some players and the team that lost the free agent would choose someone. It turned free agency into a trade. Generally the trades worked better for the team signing the free agent. In this case it worked out very badly for the Rangers. The Jays got the better player and a few months later the Jay's traded a few players that would never amount to anything to get Cliff Johnson back. So basically the Rangers traded Tom Henke for 82 games worth of Cliff Johnson. Yeah the Rangers weren't a very well run team.

The Jays called up Henke from the minors at the end of July of 1985. In the final couple of months of the season Tom got into 28 games and earned 13 saves and had a 2.03 ERA in 40 innings pitched. A good start to his career as a Jay and the Jays finished first in the AL East that season. But it seems strange that Henke would receive MVP votes and some votes for Rookie of the Year including one first place vote. How does anyone figure that a guy that pitches a big 40 innings could be MVP or Rookie of the Year? I mean I rag on award voters all the time but this is the height of stupidity. Anyway Henke picked up 2 wins in our 7 game ALCS loss to the Royals.

In 1986 Henke had his first full season as our closer and he was terrific, setting a new team record with 27 saves, winning another 9 with a 3.35 ERA in 91.1 innings in 63 games. He and Mark Eichhorn made a great pairing to end games for the Jays. With Eichhorn throwing slow junk with a submarine delivery, Henke coming in after throwing heat looked that much faster. The next season Henke broke his own mark for saves getting 34, pitching 94 innings in 72 games with 128 strikeouts and giving up only 62 hits. He earned MVP votes again coming in 13th in voting, that's the season George Bell won the award. He also made the All-Star team that year and pitched 2.2 shutout innings in the AL's 13 inning loss. This was also the season we blew the division lead at the end of the season against Detroit, Henke wasn't blameless, blowing a save against them but then he pitched 2.2 innings that game and only gave up the one run.

In 1988 he dropped to 52 games and 25 saves with newly acquired Duane Ward getting 15 saves and doing a terrific job as setup man. Henke also dropped under a strikeout an inning striking out 66 in 68 innings. In 1989 Henke had his best ERA as a Jay at 1.92 he had an 8-3 record in 64 games and 20 saves and Ward had 15 saves. They were a tremendous duo closing out games. The best pair of relievers the Jays ever had. We won the AL East again that season, but lost out to the Oakland A's in the ALCS in 5 games. Henke pitched in 3 of the games got 2.2 perfect innings.

In 1990 Henke got the lion's share of the saves getting 32 while Ward got 11. Tom had another terrific season finishing with a 2.17 ERA in 74.2 innings over 61 games striking out 75. In 1991 Henke spent some time on the DL in April and he finished with 32 saves while Ward had 23. Ward showed that he was in line to take over the closer job. Henke had a 2.32 ERA in 49 games. The Jays won the AL East again but lost out to the Twins in 5 games in the ALCS. Henke pitched 2.2 perfect innings in two appearances.

!992 was Henke's last with the team and that was the year we won our first World Series. Henke was a big part of it matching his franchise high of 34 saves during the season with a 2.26 ERA. He saved 5 more games in the playoffs 3 in the ALCS against the A's and 2 more in the World Series against the Braves though he did have a blown save in the last game, giving up a run to allow the Braves to tie the game in the 9th but we won the game in the 13th.

After the season Henke was allowed to leave as a free agent and he signed with the Texas Rangers. He was 35 and we did have Duane Ward to take over his role on the team. He played two seasons with the Rangers saving 40 games in 1993 and then finished his career with St. Louis in 1995, saving another 36 games and getting MVP votes again.

Henke was the first real closer the Jays had and lived up to his name The Terminator. A big guy, 6'5", imposing looking even with glasses and of course the hard fastball, forkball and slider he threw added to the scare he put into batters. To put it into perspective Henke's strikeouts per 9 innings of 10.29 was better than Nolan Ryan's (9.55).

Rob Neyer had Henke as the Jay's best reliever in team history, and we do too. He was, likely, the second best reliever of his era, behind only Dennis Eckersley. He finished with 311 saves good for 17th on the all-time career leader list.

I can't find any information on what he is doing now and/or if he is married. He has helped out the Jays at spring training in the past.