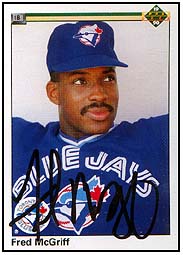 Fred McGriff (nicknamed Crime Dog, thanks Chris Berman) was born October 31, 1963 in Tampa, Florida. He was drafted by the Yankees in the 9th round of the 1981 amateur draft. A big power hitting, left handed, slugging first baseman he was clocked from playing for the Yankees by Don Mattingly. The Jays picked up McGriff, Dave Collins, Mike Morgan and cash for Dale Murray and Tom Dodd. Yeah, that trade worked out.

Fred was called up for three games in May of 1986. In 1987 he started the season with the team and slowly took over the DH role from Rance Mulliniks. He hit .247/.376/.505 with 20 homers and 60 walks in just 295 at bats, a pretty good rookie season. After the season Willie Upshaw was sold to the Indians to make room for Fred at first base.

Fred had an equally great season in 1989 going .269/.399/.525 with a league leading 36 homers and 2nd in the league with 119 walks. He was also 4th in the league in on base, 2nd in slugging average and 1st in OPS. He hit the first home run ever in Skydome June 5. Fred won the Silver Slugger award for best AL bat at first base and he came in 6th in the MVP vote, Robin Yount won the award, Jay teammate George Bell came 4th in voting. In 1989 the Jays came in first in the AL East but we lost out to the A's in 5 games. McGriff didn't have a good series hitting just .143 with no extra base hits and no walks.

McGriff was just an amazing first baseman for us, but the one little knock folks had on him was that he never drove in 100 runs for us despite hitting 35 home runs a year three years straight. One of those stupid things people say when they want to rag on someone but can't find a reason to. Mickey Mantle hit 30+ home runs 9 times but only drove in 100 in 3 of those seasons, though McGriff did hit for a poorer average with runners on base early in his career. On December 5, 1990 he was traded to the Padres with Tony Fernandez for Joe Carter and Roberto Alomar. After the trade McGriff drove in 100+ runs 8 times. Since we won two World Series in the 3 seasons after the trade, you'd have to say it worked out for us.

From San Diego Fred went to Atlanta for 4.5 seasons where he won a World Series ring. Then he played for Tampa Bay, the Cubs, the Dodgers and Tampa Bay again where he retired after a 19 year career and 493 home runs. His career hitting line is .284/.377/.509 in 2460 games. He has to be considered a Hall of Fame candidate. McGriff was 21st on Bill James list of top 100 first basemen. As he played 5 seasons after James put together the list, he likely would be up a few spots from that now.

Fred is married and has 2 children Erick and Ericka. He works in the Rays' front office. He possibly could be a few spots higher on our list, but he really only had the three amazing seasons with the Jays and one good part season. Power, a good batting eye and a good average, he was a stats guy's dream.