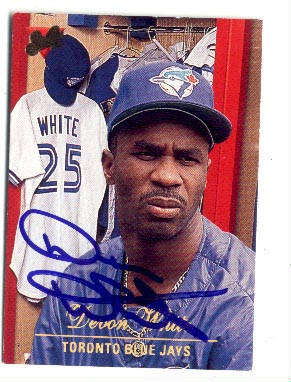 Devon White (nicknamed Devo) was born December 29, 1963 in Kingston, Jamaica. It is battle between him and Chilli Davis for the best player ever born in Kingston. He was drafted in the 6th round of the 1981 amateur draft out of Park West High School in Manhattan. He made it up to the Angels for a cup of coffee in 1985 and 1986 but his first full season in the majors was 1987 and he came in 5th in Rookie of the Year voting. He hit 24 home runs as a rookie the most he would ever hit in the majors and he had 87 RBI, also a career high.

On December 2, 1990 the Angels traded White, Willie Fraser and Marcus Moore to the Jays for Junior Felix, Luis Sojo and Ken Rivers. We can count that trade as a win for the Jays; Felix was three years younger than White but never reached his potential with the Angels. Jay manager Cito Gaston installed White in center field and the leadoff spot for us, where he stayed until we acquired Ricky Henderson in August of 1993, and then Cito moved him to the number 2 spot in the order. The next year he was back in the leadoff spot where he stayed till he left the team in 1996.

So to start the 1991 season Cito took a guy whose best on base percentage in a season to that point had been .306 and put him in as the everyday leadoff despite the team trading for Roberto Alomar who would have been a terrific leadoff hitter. But Cito felt it was important to show faith in Devon and maybe it worked, White had likely the best season of his career hitting .282/.342/.455. I guess it is worth noting that his OBP was just .001 better than Marcum Scutaro's last season, and Marco wasn't anyone idea of a great leadoff hitter.

He also hit 40 doubles, 10 triples and 17 home runs, stole 33 bases and scored 110 runs (4th in the league). He received some votes for MVP finishing 16th in the voting. He may have gotten ripped off in that vote. Cecil Fielder was the MVP, but compared to White he did precisely one thing better than White, hit home runs, 44. White had 17 homers, which is a huge edge to fielder, 27 home runs. But White had 15 more doubles, 10 more triples, 33 more steals and a 21 point edge in batting average. Add in how much better he was defensively, a terrific defensive CF compared to a poor 1B. I'm not really saying White should have been MVP, because there were others between Fielder and White in the voting. But White was better than Fielder. And he hit terrific in our 5 game ALCS loss to Twins hitting .354/.427/.409 with 3 stolen bases.

During our first World Series winning season, 1992, Devon didn't hit near as well, batting .248/.303/.390. He still scored 98 runs, a testament to the great offense we had. He did still hit 17 home runs and stole 37 bases. But he turned he on the bat during our ALCS win over Oakland batting .348/.448/.435 though he was caught stealing 4 times. He didn't hit as well in our World Series win against Atlanta, but he made the catch that will be remembered forever.

With runners on first and second David Justice hit a fly to deep center field, Devon ran the ball down and put a foot into the wall to get height to make the catch, then turned and threw to first to double up Terry Pendleton. But Pendleton was already out for passing the runner in front of him, so John Olerud threw the ball to Kelly Gruber at third. Kelly chased down Deion Sanders, dove and tagged him on the foot for what should have been a triple play. Unfortunately the umpire missed the call and we only got a double play out of what should have been a historic play. But the catch by White has to be one of the greatest catches in World Series history. I was hoping there would be a you tube video of it but I couldn't find one. I don't think any other center fielder in the league could have made that catch.

Before the 1993 season, Pat Gillick signed free agent Paul Molitor, one of the 3 or 4 best leadoff men in baseball, but Cito still decided to use Devo in the leadoff spot anyway. So Gillick traded for the greatest leadoff man in the history of baseball, and Cito grudging moved White into the second slot in the order, which had the effect of having Molitor (or sometimes Alomar) moved to the 6th slot in Cito's batting order. Oh well.

The next couple of seasons were shortened by the lockout/strike. White stayed in the leadoff spot with on base averages of .313 and .334, but the team wasn't as good. After the 1995 season he signed with the Florida Marlins as a free agent and picked up his third World Series ring there in 1997. From there he went to the Diamondbacks, Dodgers and finally the Brewers where he finished his career in 2001. He had a 17 year career and finished with 208 homers, 346 steals and 1125 runs.

He didn't have a bad bat, I think he was misused as a leadoff hitter, but that likely didn't cost the Jays more than a handful of runs. He struck out a bit too often and could have walked more, with his speed that would have helped a lot. But as a defensive center fielder he was easily as good as anyone. I really think he is the best defensive outfielder I have ever seen; he had that great gliding, running style that made him look so smooth. He didn't have a lot of highlight film type catches because, well, he'd get to the ball in time that he didn't have to make the diving, tumbling catch very often. He had as much range as any player I've ever seen. And he was likely as fast a runner as there was in the majors at the time, though he did hit into a surprising number of double plays.

Rob Neyer had him as the second best center fielder in Jay history, of course that was before Vernon Wells. Bill James ranked him as the 81st best center major lead history; this was in 2000 so it is likely he's dropped a few spots.

White currently works as a special assistant for player development for the Washington Nationals.