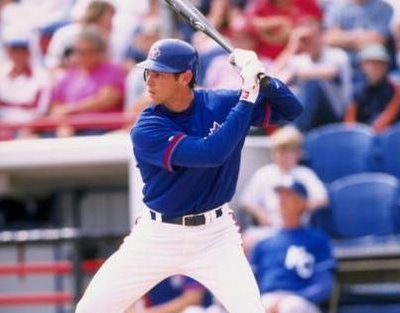 Shawn Green was born November 10, 1972 in Des Plaines Illinois. He was picked in the 1st round of the 1991 amateur draft by the Jays out of high school in Tustin, California. Manny Ramirez was picked up two spots before him. We got the pick from San Francisco as compensation for their signing of our free agent Bud Black. He received a $725,000 signing bonus.

Shawn quickly rose thru the Jay's system, basically becoming the Jay's top prospect (well it was a tossup between him and Carlos Delgado) from the moment he signed. In 1992 he made the Florida State league's All-Star team, his first full season in the minors playing A-ball. The next season, playing in Double-A he broke his right thumb in June. After recovering from the injury he was called up to Toronto near the end of September and was hitless in 6 at bats and sat on the bench during our World Series win. In 1994 Green won the team MVP award for Triple-A Syracuse and he led the International League in batting at .344. He was called up to the Jays in early June and sent back down in early July after 33 at bats.

Cito did not like Green for some reason. Well, actually the reason was that Cito preferred veteran players. Cito could not bring himself to trust young players no matter how talented they were. Green, Carlos Delgado and Shannon Stewart were prime examples. Green, in particular, seemed to take the brunt of Cito's mistrust. Green was a fine outfielder with a strong arm but under Cito any mistake or slump was a reason to bench him. He was even replaced with a washed up Ruben Sierra for a bit. With a player of Green's potential all that was inexcusable.

With Cito gone and the legendary (at least in his own mind) Tim Johnson in as manager for the 1998 season Shawn (as well as Delgado and Stewart) was given a full time role. And boy did he show he deserved it, he hit .278/.334/.510 with 100 RBI, 106 runs, 35 homers and 35 steals, becoming the Blue Jays first ever 30/30 man. As well as hitting amazingly, Green played great outfield, including 31 games in center. He came in 4th in the AL with 14 outfield assists.

In 1999 Green had one of the best seasons ever by a Blue Jay, hitting .309/.384/.588, with 45 doubles, 42 homers, 134 runs, 123 RBI and 20 steals. He was 9th in the AL MVP voting, he won a Silver Slugger award and a Gold Glove. He finished 2nd in the AL in runs, 1st in doubles and total bases, 5th in home runs and 6th in RBI. He set Jay franchise records in extra base hits and runs scored and set a team record with a 28 game hitting streak. His season would have been even better had he not been hit by an Andy Pettitte pitch that fractured a bone in his wrist. That cost him a handful of starts and after returning from the injury it took a few games to get hitting with power again.

After the season the Jays announced that Cito Gaston would be coming back as a hitting coach for the 2000 season. Green wasn't thrilled, as they hadn't gotten along before and he decided to ask to be traded closer to his home in California. Our brilliant GM, Gord Ash traded him with Jorge Nunez to the Dodgers for Raul Mondesi and Pedro Borbon. Mondesi wasn't a bad player but he didn't have the work ethic to become the star we hoped he would. He had two decent seasons for us, and then in the middle of his third season, when he was batting a big .224, we got incredibly lucky when the Yankees took him off our hands for us, without us having to pay the rest of his salary.

Shawn was terrific for the Dodgers for 5 seasons, hitting 49 homers in 2001 and 42 in 2002 though his power numbers did decline at the end of his time in LA. In 2005 he was traded to the Diamondbacks and after a season and a half there he was traded to the Mets, Where he played for a year and a half and then retired before the 2008 season.

He had a heck of a career hitting 328 home runs over 15 seasons. His career hitting line was .283/.355/.494. His career numbers could have been that much better had Cito realized what he had in Green and had given him a full time job when he should have. But then the world is full of ‘what ifs?'. He really was a terrific player; I wish he had stayed longer with the Jays, he was a favorite of mine because he seemed like a very likable person. A left-handed, slugging outfielder, good glove and strong arm, what's not to like. Rob Neyer has him as our 2nd best right fielder.

Shawn is Jewish, likely the best Jewish major leaguer since Sandy Koufax and is only 2nd to Hank Greenberg in home runs and RBI among Jewish players. And, of course, he is in the Jewish Baseball Hall of Fame. He is married and has two daughters.