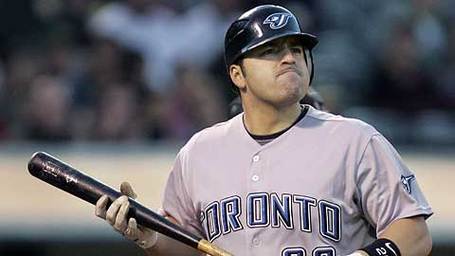 We haven't done one of these for a little bit, I'd say there was a reason but mostly I think we forgot about them. Anyway, Big Rod there is going into this season as our number one catcher, unlike last year when he was to back up the heavy metal loving ZMan, but slowly took over the lead role. Last season he finished with a .249/.294/.410 line, with a big 11 homers in 349 at bats. To say he was inconsistent would be a major understatement in May he hit .370, in September he was .162 and in between he was all over the place.

Your assignment, if you choose to accept it, is to predict what he'll do this season. What we need is his number of plate appearances, his AVG/OBP/SLG line, fielding runs above average (0 is average, 5 is good, -5 bad, 10 very good, 15 gold glove and oh come on, this is Rod Barajas, he ain't going to be a +20) and any other counting stats you'd like to throw in.