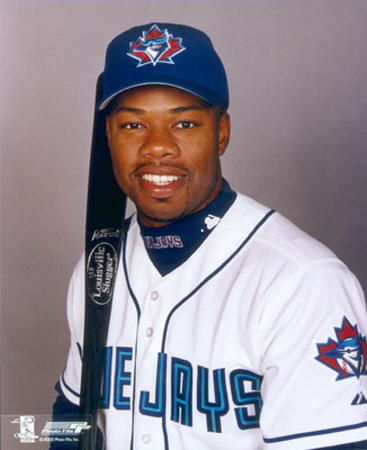 Shannon Stewart was born February 25, 1974 in Cincinnati, Ohio. He was drafted by the Blue Jays in the first round of 1992 amateur draft, the 19th pick overall, out of Miami Southridge High School. He was a compensation pick for the Dodgers signing free agent Tom Candiotti. He rose quickly thru the Jays farm system and was a September call-up in 1995 and 1996. In 1997 Shannon was called up in mid-August and was given the full time CF job for the rest of the season after Otis Nixon was traded to the Dodgers.

In 2002 Stewart had another very good season batting over .300 (.303) for the 4 season in a row and scored over 100 runs (103). Again a terrific leadoff hitter getting on base at a .371 rate, though he wasn't the base stealer he had been in the past, stealing only 14 bases. He hit third in a handful of game as well. He did miss time on the DL list again with hamstring troubles. He played left field mostly though he DHed 38 times.

2003 he started the season well again but on July 16 the Jays traded him to the Minnesota Twins for Bobby Kielty. Trading him wasn't a bad idea; he was 29 and did have injury issues and he did everything well but didn't do anything very well and players like that tend not to age well. I thought, at the time, we could have done better than Bobby Kielty in exchange for him, but then we flipped Kielty for Ted Lilly, after the season, so it turned out ok.

The Twins got a couple of good seasons out of him but he lost most time to injury and his numbers declined quickly, but he did get into the post season with the Twins in 2003 and 2004. From the Twins he went to Oakland and had an ok season there, then the Jays picked him up for the 2008 season. The less said about that the better, though I still don't understand what they thought they were getting, the man hadn't slugged .400 since 2004 and the only position he could play was left field, a position where average offence isn't good enough.

If Shannon's career is over, he's had a good one, 14 seasons, 1653 hits, 853 runs and a .297 average. Without the injuries his career could have been that much better but then if wishes were horses then beggars would ride.

Another thing that could have helped his career out would have been if the Jays had a different manager. Cito Gaston, back in those days, didn't like to go with young players and Stewart is one of several that lost a season or two at the start of his career. In 1986 and 1987 the Jays had an aging Otis Nixon in center field. Now Nixon wasn't a bad player but he wasn't the sort that should have kept Shannon Stewart out of the lineup. In fairness to Cito the team was in ‘win now' mode during his first stint with the team. Now he can relax and let young players have their chance.

He'd have to be considered the team's best ever lead off hitter for his time in the role from 1998 to 2003. He is married. And ummmm when you search for pictures of the man, you will find some interesting ones, there is a ‘model' named Shannon Stewart. She looks somewhat different from our Stewart.