An Albertan in Arizona

Share All sharing options for: An Albertan in Arizona

Bluebird Banter member NoBunting is in Arizona and went to a ball game. He sent in a report and a some pictures and here it is:

In most of the civilized parts of North America it seems like baseball season is a long long way away. Given the recent snap of cold weather, further away for some than others. So in order to indulge our longing for the game we love, I have taken time off from golf to bring you all the next best thing to Blue Jays ball...a post game report from Tucson Arizona, spring home of the Colorado Rockies. Sorry that I can't report on the Jays but I'm on the other side of the country and have no intention of visiting Florida any time soon. So here's my attempt at being a sports reporter...You will note that there is a distinct lack of player names in this story and the reason is simple; there were no big name players in the game (most of the fans near us were of the same opinion) and they were changing players and shifting positions so frequently, there was no way I could keep track of the changes. 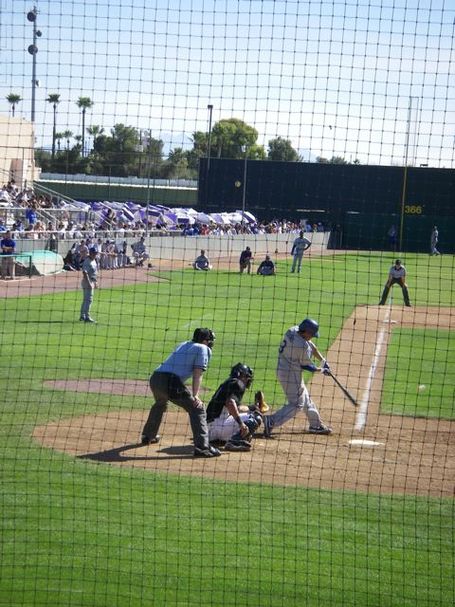 The Dodgers took on the Rockies in a wonderful afternoon game. The Dodgers made it look a bit too easy winning 13 to 5, with the score making this game look a lot closer than it really was. Colorado had a brief lead in the second inning but that was about the entire highlight of the afternoon for them. After scoreless third and fourth innings, the Dodgers got things rolling with two in the fifth and four more in the sixth. Colorado managed a single homer in the seventh.

The real excitement came in the top of the eighth inning, when LA loaded the bases on some poor fielding and then promptly emptied them with a wonderful grand slam to deep centre field. They added some salt to the wounds with another single followed by another home run to right field for two more. Colorado switched pitchers and managed to get out of the inning (thank God for small mercies).

Colorado did manage to put some offense together in the bottom of the ninth, but it was just too little too late. They managed to get two runs but it was more due to poor fielding and pitching by LA rather than much skill on their part.

In fairness to Colorado, they were playing a lot of rookies. The lifelong Rockies fans near us didn't recognize many of the players either so it explains why they looked more like a double A team, rather than a major league team in the making. The Dodgers were playing rookies too and they also started the game playing triple A ball, but by the middle of the game they definitely started looking like a major league team. The Rockies just never started to look better. 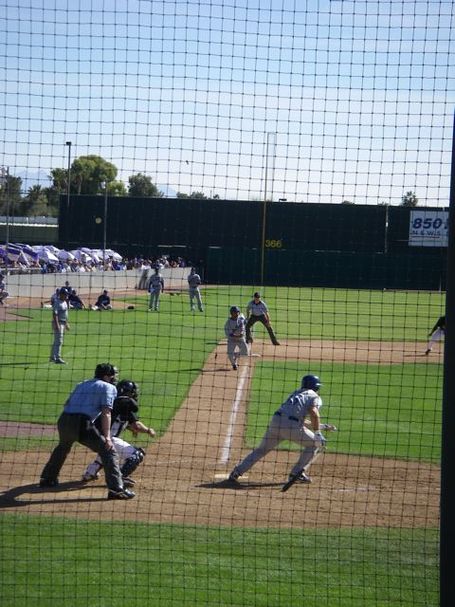 Throughout most of the game, Colorado played the entire outfield shifted to the right, with the left fielder playing most of the way to centre field. During one play, a fairly routine fly ball to dead centre turned into something more resembling a gong-show. The left fielder started going for the ball, then stopped. The centre fielder was then forced to try to make a diving catch which he promptly dropped. The Rockies were tagged with three errors but it could have (and should have) been much worse on the score sheet.

Both teams were guilty of some comical errors, most of which were not charged. The most notable was by the Dodgers who made a nice play stealing third. The Rockies catcher made a attempt to throw the runner out at third and over threw the third baseman. Now the Dodgers runner at third was more concerned that he got his nice new pants dusty and was too busy cleaning himself off to realize that the ball was now deep into left field (remember that the left fielder was playing closer to centre field). Now the Dodgers third base coach was obviously more interested in something (it was warm and lots of low cut tops were in the stands) because he was completely oblivious to what was going on too. By the time these two figured out what was going on, the ball was back to the Colorado short stop and a golden opportunity was squandered.

In the end, LA has some good rookies and should have a strong team this season. A few Rockies fans summed the start of this season up as being the worst team they have seen yet. That's a lot from a bunch of retired fans who have watched spring training for the 15 years or so the Rockies have been in the league. Its early and the truth was that spring training is the time to be looking at the rookies. I doubt that the Rockies will be a championship team this year but hope springs eternal.

Unfortunately this will be my only opportunity to report on spring training. I could prepare a report on the third round of the Accenture World Golf Championships but with no pictures there's not much to show.