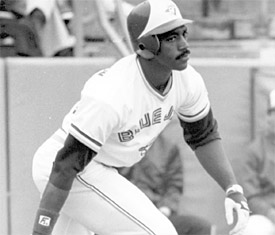 Willie Upshaw was born April, 27, 1957 in Blanco, Texas. He was drafted in the 5th round of the 1975 amateur draft out of high school. The Tigers picked Lou Whitaker earlier that round so Upshaw was the second best player taken in that round that year. With the Yankees having Chris Chambliss at first base, Willie was blocked from making the major leagues. The Jays picked him up in the rule 5 draft in 1977 and as a rule 5 pick he had to stay on the team for that season.

His rule 5 season was terrible like most rule 5 players are their first season. He hit just .237 with 1 homer and 17 RBI in 95 games. With John Mayberry at first most of his playing time came in left field though he did play a few games in center. In 1979 he spent the whole season in the minors, 1980 he got 61 at bats and the strike shortened 1981 he got into 61 and hit a big .171 in 111 at bats. Amazingly enough this was enough to earn him the full time first base job. Early in 1982 the Jays traded John Mayberry to clear a spot for Willie.

In 1984 Willie dropped off some with only 19 home runs and 84 RBI off a .278/.345/.464 season. Once again he received MVP votes, finishing 16th in the voting, highest of any Jay in the voting. He had almost the same season in 1985 hitting .275/.342/.447, except for the one big year he was a Lyle Overbay type. He likely would have been better off at the top of the lineup against right-handed pitchers, instead of being in the RBI spots.

Upshaw's last couple of seasons with the Jays were small steps down in production. 1986 he had just 9 home runs hitting .251/.341/.368. He started the season in the cleanup spot of the order but in June he moved lower in the order but over the last couple of month he often hit in the 2 spot. With 78 walks and 23 steals just being caught 5 times he would have made a good leadoff hitter. His last season with the Jays some of his power returned, he hit 15 home runs. But his on base dropped thru the floor, getting on at just a .324 rate, his worst in a full season with the Jays. He hit in every spot of the line-up except cleanup.

After the season, with Fred McGriff ready to take the first base job, Willie was sent to the Cleveland Indians. He played just one season there and from there he went to Japan and played 2 seasons. He had a pretty good 10 year career in the major leagues. Among the trivia on Wikipedia about him, he is the career leader in homers (123) and RBI (528) among players with a last name starting with a ‘U'.

Upshaw was the start of a run of really excellent first basemen the Jays used. Bill James has him listed as one of the best looking players of the 80's and had him as the 104th best first basemen of all time in his New Historical Baseball Abstract. He was a good defensive first baseman though he did make a lot of errors; he had a good arm and was good at the 3-6-3 double play. He always got off to a fast start early in the season and was a nice guy, well liked by everyone.

Upshaw was hitting coach in the Jay's minor league system and was the first base coach for the San Francisco Giants in 2007. This season he will be bench coach of the Bridgeport Bluefish of the Atlantic League of Professional Baseball. His son, Chad Upshaw, is a tight end with the Carolina Panthers.