Bits on a Monday Morning

Share All sharing options for: Bits on a Monday Morning

Hope you all had a good weekend, mine was good and quiet, at least till I looked at middle son's report card, that weren't so fun. So yesterday wasn't so great but that's life. Anyway....

Over at Hardball Times they have a piece where their writers remember John Brattain. One Writer, Chris Jaffe, mentions his 'top 10 lists' and shows a great example:

Top 10 ways you know that you're too much into sabermetrics:

I love it. An other thing they have on their site is a way to donate to the 'John Brattain Memorial Fund'. A very nice idea, the money will go to his wife and kids. So if you have an extra few dollars....

Over at Mop Up Duty, they have the first of a two part Toronto Blue Jay Round Table, where they ask some interesting questions about our Jays and some of the Jay bloggers attempt to answer them, including Hugo and yours truly.

And, over at Ghostrunner on First, they say nice things about us (if you could read that with a surprised tone, I'd appreciate it). It is a good feeling when a site that you have enjoyed for years mentions you, but I don't know how they found out about our night job. Like there is something wrong with providing product for hard working women whose names all end in i (Candi, Brandi....).

We get mail! (yeah, normally it is trying to sell me things to make parts of me bigger, you think my wife is putting me on mailing lists?). A new member here, Gojones71, was at the Jays/Astros game yesterday and sent me some pictures. Now I'm not going to whine about other people being in Florida while I was shoveling 8 inches of snow off my driveway. Anyway here is a couple of them: 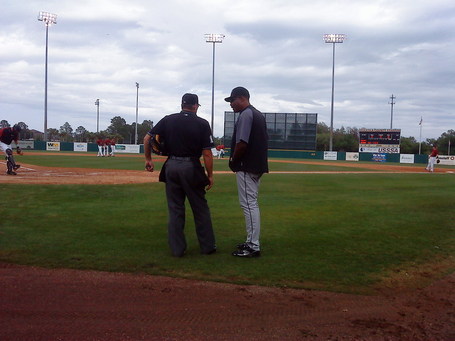 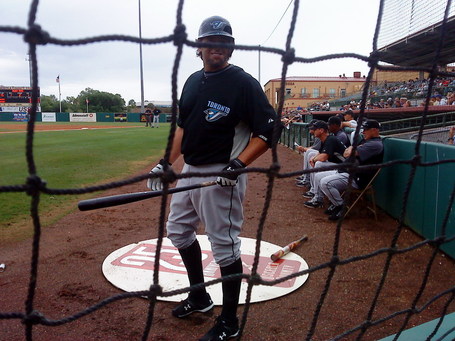 Just for this occasion I won't say anything nasty about Kevin Millar, though biting my tongue this hard might cause bleeding. You can see why the game was rain delayed. And you can notice that Cito's posture when chatting with an umpire is exactly the same as his posture when arguing a call. Thanks Nik, next year I'm going to get down there for a few games.

We'll be back in a bit with the Game Thread.