Wow. When you just have one hit and are down by 3 in the bottom of the 8th you aren't really expecting a win. Edwin Jackson had us again tonight but then in the 8th Scott Rolen led off with a homer, then Lyle got on on an error. After Rod Barajas popped out, Tigers took out Jackson. That was the best news of the night, they have one awful bullpen. Bobby Seay got Snider to hit into a force out at second. Then the Tigers brought in former Jay Brandon Lyon. Lyon was terrible. Scoot singled and Aaron Hill hit a 3 run homer to give us the lead.

Man it is great to have Hill back, Inglett was good last year but Hill has had an amazing defensive play in both games. And the home run. Anyway let's put in the fangraph here....a thing of beauty it is. 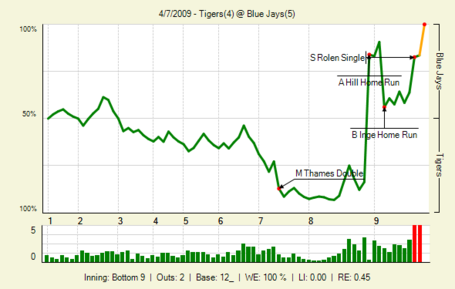 Unfortunately Hill's home run didn't turn out the be the game winning hit. In the bottom of the 9th BJ Ryan came in and gave up a game tying homer. It is too bad that he gets a blown save in his first chance. I know the phone-in shows and, likely, our comment sections will be calling for him to removed from the closer role, but let's not get too worked up about 1 blown save. Apparently he was hitting 89 on the radar gun and that's about what he was doing last year.

But lucky for us, Brandon Lyon was still pitching for the Tigers. A one out walk to Lind (pinch run for by Jose Bautista, is he fast?) and a single by Rolen to give us runners on the corners. Then comes the thing I don't understand, the Tigers walked Lyle Overbay to load the bases. I guess they don't scout anymore in the major leagues but Lyle was a double play machine last year.

Now I'm not Rod Barajas biggest fan, but the guy came thru when we needed him. A deep sac fly and we is 2-0 and in sole posession of first place. Yeah, I know, 2 games in, but hey.....I might not get to say this much this year.

Jays of the Day: Hill (.570 WPA), Rolen (.183) and Rod Barajas (.129). Honorable mention to David Purcey who pitched well enough to get the win but we didn't score for him. 7 innings, 5 hits, 3 run, 2 earned, 3 walks and 5 strikeouts. The wild pitch on the intentional base on balls hurt a lot. And Barajas' throwing error on the same play was bad too.

Suckage Jays? BJ gets the first Miguel Batista Award of the year with a -.189 WPA and though it hurts me to say it, Travis Snider gets the Hinske Award with a -.136 on an 0 for 3 leaving 2 guys on base.

Tomorrow night Jesse Litsch starts for the Jays while Zach Miner goes for the Tigers. Let's keep it going.