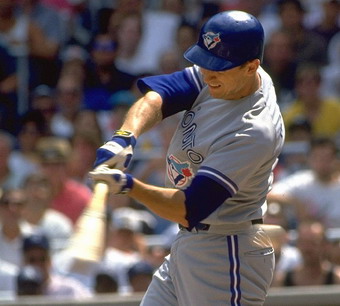 John Olerud was born August 5, 1968 in Seattle, Washington. His father, also John, played catcher for Washington State University and played professional ball reaching Triple-A ball. John Jr. was drafted in the 3rd round of the 1989 amateur draft by the Jays out of Washington State University where he both pitched and played in the field. In fact he was 26-4 as a pitcher in WSU. He is one of just a handful of players that started his professional career in the majors and never played in the minors until 2005 when he spent a few games there to get up to speed after being signed by the Boston Red Sox in May of 2005.

Everyone remembers him for wearing his batting helmet while playing first base. The story is that he collapsed after a workout and was found to have bleeding in his spinal column in early 1989. About a month later he had surgery to remove a brain hemorrhage. After that he wore the batting helmet in the field just to be extra careful.

After he was drafted he signed with the Jays in late August and, since rosters expanded in September, the Jays decided to let him spend the end of the season with the big team. He got into a few games as a defensive replacement. In 1990 he made the Jays out of spring training and platooned at DH, since the Jays had Fred McGriff playing first. John played against right-handed pitchers, hitting .265/.364/.430 in 111 games. He also was 4th in Rookie of the Year voting. After 1990 the Jays traded McGriff and Tony Fernandez for Roberto Alomar and Joe Carter, which opened up first base for Olerud.

In 1991 John platooned at first with Pat Tabler at the start of the season and with Ed Sprague the second half of the season. He had a pretty good season, kind of a Lyle Overbay type year, hitting .256/.353/.438 with 17 homers. Bill James compared him to a young Rusty Staub but he turned out to be a far better player. He played in all 5 games of our ALCS loss to the Twins and but had only 3 hits in 19 at bats in the series.

Our first World Series winning year, 1992, Olerud played full time, starting against right-handed and left-handed pitchers, he didn't even miss many games when he had his nose broken by a pitched fouled off during batting practise. His batting took a step forward, he hit .284/.375/.450. He also did well in our ALCS series win over Oakland, hitting .348 with a homer. He hit .308 in our World Series win over the Braves, though he only played in 4 of the 6 games as Cito had him sit a couple of the games in Atlanta when he didn't have the DH, putting Joe Carter at first instead.

1993 was his big season; he hit .363/.473/.599, with 24 homers, 54 doubles, 200 hits, 114 walks, 109 runs and 107 RBI. He was hitting over .400 August 2 but fell off a bit the last couple of months of the season. He led the league in batting average, on base percentage, OPS (1.072), runs created (161), doubles and intentional walks (33). He made the All-Star team, won the Hutch Award (give to the player who best examples the ‘fighting spirit' and ‘competitive desire to win') and came in 3rd in MVP voting. Frank Thomas won it that year and teammate Paul Molitor finished second. Olerud's season was better than either of them but then MVP voters don't always get things right. He also had a 26 game hitting streak and was just the 20th player in MLB history to get 200 hits and 100 walks in a season. It is right up there on the list of best seasons ever for a Jay, maybe the second best season for a Jay behind Carlos Delgado's 2000 season.

He hit well in our ALCS series win over the White Sox hitting .348 with 4 walks. In the World Series win over Philadelphia he didn't hit great at just .235 but he did have a home run and 4 walks. At just 24 he had two World Series rings, a pretty decent young life eh?

The next couple of seasons were lockout/strike shortened, the Jays didn't do as well as they had the few years before. Olerud didn't hit at the level he had in 1992 but he got on base at over a .390 clip each year. He would have made a great leadoff man but Cito's mind didn't think that way. 1996 was his last year with the Jays. He didn't have his best season with the bat hitting .274/.383/.472 with 18 homeruns. He only played 125 games as Cito liked using Joe Carter at first and Carlos Delgado was forcing his way on to the team.

After the season, the Jays having Carter, Delgado and Olerud for two positions, someone had to go. Delgado wasn't making much money and had a great career ahead of him and Carter was Cito's favorite. Cito didn't like John, thinking he wasn't aggressive enough at the plate, among other things. Also the great season Olerud had in 1993 caused expectations that he didn't match in the 3 seasons since then. So the Jays ignored the fact that Olerud was younger, a better fielder and really a far better hitter than Carter and decided to trade him.

Now if choosing to trade Olerud was a mistake, Gord Ash's trading him to the Mets for pitcher Robert Person was an even bigger mistake. Person was 8-13 with a 6.18 ERA in the 2 and a bit seasons with the Jays. Add in that Olerud was a terrific player for several more seasons and Joe Carter, well, wasn't and you have just a crappy trade. But then Ash was a terrible GM for us.

Baseball Reference has Olerud at 6'5" 220 pounds, I don't remember him being that big, but I guess my memory is wrong. John had the picture perfect left-handed swing and a terrific eye at the plate. He was good with the glove, winning 3 Gold Gloves during his years as a Mariner. He likely should have won a Gold Glove or two when he was a Jay, but Gold Glove voters don't really care to figure out who the best defensive player is. He was a Lyle Overbay type but, you know, better.

Bill James had him listed at 53rd best first baseman in baseball history in his New Historical Baseball Abstract, since he had a few good seasons after the book, he'd likely be up into the 30's now.

John Olerud is married and lives in Fall City, Washington and has a son and a daughter.