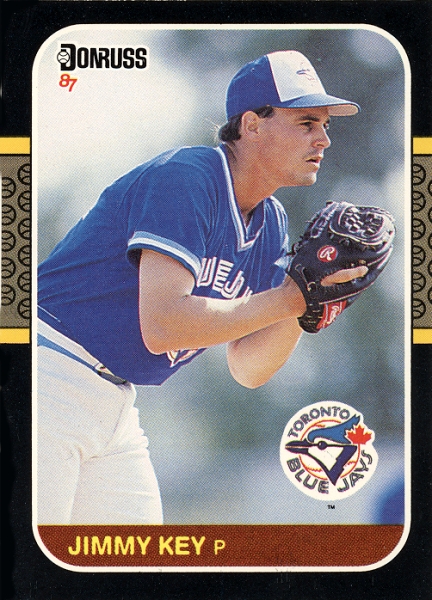 Jimmy Key was born April 22, 1961 in Huntsville, Alabama. He was drafted in the 3rd round of the 1982 amateur draft by the Jays out of Clemson University. He very quickly rose to the Majors, making the Jays out of spring training in 1984. They had him pitch out of the bullpen that season. Back then the Jays tended to use first year pitchers in the pen figuring that was the best way to teach them how to pitch in the majors. He quickly became part of a closer-by-committee group, which manager Bobby Cox used. He was tied for the team lead in saves with 10, with Roy Lee Jackson. Dennis Lamp had 9 that year. The Jays finished 2nd to the Tigers that season, but 15 games back. There wasn't pennant race that season, Detroit jumped out with a great start and never slowed down.

The next season, 1985, Jimmy started the season in the rotation and stayed there for the next 8 seasons. He was amazingly consistent winning between 12 and 17 games each year as a Jay starter. In `85 he 14-6 and made the All-Star team, he was 4th in the AL in ERA at 3.00. Had he not pitched a few too many innings in 1984 he would have been a strong candidate for Rookie of the Year. Also in 1985 we made the post season for the first time losing out to the Royals in 7 games. Key started game 2 that the jays lost in extra innings and started game 5, taking the loss in a 2-0 game.

1988 Key missed 10 weeks of the season with an elbow injury and surgery; he only made 21 starts but still finished with a 12-5 record. In 1989 the Jays made the postseason again. Key didn't have a great record finishing 13-14 with a 3.88 ERA in 33 starts, but he did reach the 8th inning in 18 of those starts. He started and won game 3 of our ALCS, unfortunately that was out only win in a 4-1 series loss to Oakland.

He missed some time again with injuries in 1990 but finished 13-7. In 1991 we made the playoffs again and Jimmy important piece going 16-12 in 33 starts and with a 3.05 ERA. We again lost out in the ALCS, this time to the Twins. Key had a no decision in our game 3 extra innings loss. He made the All-Star game again this season and was the winning pitcher in the game, which was played in Toronto.

Our first World Series winning season, 1992, Key was just 13-13 with a 3.53 ERA in 33 starts during the season. In the ALCS against Oakland, Key was used out of the pen as we had a number of great starters. In the World Series against Atlanta Key started and won game four, going 7.2 innings of a 2-1 win. He also was the winning pitcher of the series finishing game 6 coming in in relief in the 10th inning. We only had 2 pitchers win in our 4 wins of that series. Duane Ward was winning pitcher for our first two wins and Key won the last two.

Key had a great 15 year major league career finishing 186-117 with a 3.51 ERA in 389 starts. With the Jays had 116 wins in 250 starts over 9 seasons. Not quite a Hall of Famer but a very good pitcher. His first season as a starter he didn't strike out many batters, just 3.6 per 9 innings, but after that he struck out slightly more than the average pitcher finishing with an average of 5.3 strikeouts a game, but with was never a big strikeout guy. He was a ground ball pitcher and had terrific control. In his career he only walked 2.3 batters per 9. He was a good fielder and was good at holding the runner at first. Add in that he was very consistent, had great composure and was durable, he made all his starts almost every year.

Key was not a very big man at 6'1" and 185 pounds and didn't have an overwhelming fastball. He threw a great curve, spotted the fastball (Bill James called it a batting practice fastball), and had a change and a slider. Rob Neyer had him as the 2nd best Jay's starter in his ‘Big Book of Baseball Lineups' but that was before Roy Halladay had much time in. In that book it lists his nickname as Pee Wee apparently because of a resemblance to Pee Wee Herman.

Jimmy is married and has children. He is apparently an avid golfer. I'll admit he was a favorite of mine, gotta love those lefties that don't throw hard enough to break a pane of glass.