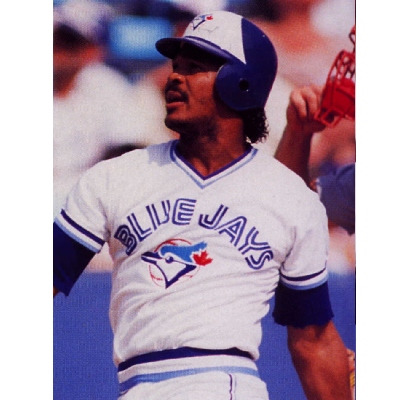 George Bell was born October 21, 1959 in San Pedro de Macoris, Dominican Republic. His brother Juan Bell also made the majors as a utility infielder for 7 seasons for several different teams. He has 2 other brothers that played professional baseball. George was signed as an amateur free agent by the Phillies in 1978. The Jays picked him up in the 1980 rule 5 draft. It must have been one of the best rule 5 pickups ever.

Rule 5 draft pickups have to spend the season on the major league roster or they get offered back to the team that they were drafted from, so George played with the Jays in the strike shortened 1981 season. He didn't do terrible, though a little overmatched at the major league level; he got into 60 games and hit .233/.256/.350. But somehow he got a couple of Rookie of the Year votes. Yankee Dave Righetti won it that season.

George felt he had earned a spot on the Jays the next season but the Jays didn't and sent him off to Syracuse. He had a pretty tough year, he contacted mononucleosis in April and then wrecked his left knee in June. When he got back from that he had his jaw broken by a pitch. Getting hit by that pitch might explain why he was overly sensitive to being hit by pitches, he was ejected a number of times for charging the mound. He started 1983 in the minors again but was called up for good in July of that season.

In 1984 Bell became a full timer with us. He was part of a pretty complicated platoon system Bobby Cox used in the outfield, against left-handed pitchers Bell would play left field and Jesse Barfield would play right, against right-handers Bell would play right field and Davey Collins would play left. As a young player Bell had a decent arm and ok range as an outfielder, course Barfield had a better arm and Collins a terrible arm. George played 159 games, hit .292/.326/.498, with 39 doubles and 26 homers, 87 RBI and 11 steals. He received some MVP votes. He was 8th in the AL in total bases and 3rd in doubles.

After the season Dave Collins was traded to Oakland to allow Bell, Moesby and Barfield all to play full time and the best outfield in Jays history was born, they played together until Barfield was traded early in the 1989 season. They were a great unit, all three were terrific offensive players, all three had good to great arms. Moesby and Barfield were good defensive players, Bell, far less so, he didn't have much range as he aged and his knees suffered from playing on the hard artificial surface in Toronto. He also made too many errors.

Bell had another very good season in 1985 hitting .275/.327/.479, 28 homers, 95 RBI and 21 stolen bases, the most in his career. Bell won the Silver Slugger award for batting and came in 8th in MVP voting, one spot behind Jesse Barfield. Don Mattingly won it that season. Jays made the post season for the first time that year, likely many remember Bell catching the last out in the game that clinched the AL East title and fell to his knees. Bell did ok in the 7 game series hitting .321, 9 hit, 3 doubles, no homers, but the Jays lost to the Royals.

1987 was the big season for Bell. He hit .308/.352/.605, had 47 home runs, 134 RBI and 111 runs. He again won the Silver Slugger award and made the All-Star team for the first time. And, of course, he won the MVP award, just beating out the Tigers Alan Trammell, the first league MVP from a Canadian team. The vote was a little controversial because that was the less than fun year that the Jays fell into a bad slump at the end of the year, losing their last 8 games and the Tigers past them by at the finish to win the AL East. Those last 8 games were a train wreck; Bell hit just .111 over them, but then the only Jay to hit well over that period was Lloyd Moesby.

The next season was an interesting year for Bell and the Jays. Jimy Williams became manager and he decided that Bell would DH and top prospect Sil Campusano would play in the outfield. Only two things went wrong with the plan. One, Bell didn't want to DH and Bell wasn't one to be unhappy quietly and two, Sil Campausano was terrible. Williams' time as manager didn't last long and it wasn't happy at least partly because of George. Bell's numbers fell off a lot that year despite becoming the first major leaguer to hit 3 home runs on opening day.

1990 was his last season with the Jays and it wasn't very good, he hit .265/.303/.422 with 21 homers and 86 RBI. After the season he signed with the Cubs as a free agent, had one good season there and then was traded to the White Sox for Sammy Sosa. The Cubs won that trade. George played for 2 seasons with the White Sox and was released after the 1993 season after making some nasty remarks about Sox manager Gene Lamont when Lamont replaced him in the playoff lineup with Bo Jackson.

Bell had a good 12 year career, finishing with 265 homers, 1002 RBI, .278 BA. He was a free swinger, didn't walk much and his defense was best described as terrible. His arm was underrated, he had more outfield assists from 1984-1987 than any players other than Barfield and Glenn Wilson. He wasn't a terrible outfielder when he came up to the big leagues but playing on artificial turf wrecked his knees and he lost his speed, costing him range. Of course, it didn't help that he considered it an insult to his manhood when they wanted him to move to DH.

But he could rake. He holds the Jay's team record for home runs in a season with 47. Gene Mauch who was manager of the Angels called him "the intimidating hitter in baseball". He was your basic first pitch fastball hitter, if he could reach the first pitch, he'd hit it and he was good at it.

Bill James had him as the 62nd best left fielder of all time in his New Historical Abstract, likely he has dropped a few spots since then. Rob Neyer in his Big Book of Baseball Lineups has him as our best left fielder ever. And of course he was. He is up on the Roger Center's Level of Excellence.

He also had, how to put it, a bit of a temper. Likely most of you remember him taking a flying kick at pitcher Bruce Kison after Kison hit him with a pitch. He was ejected from 13 games in his career. He didn't get along with the media or with managers. And there was the time he ‘invited' Canadian fans to "kiss his Dominican ass". Likely some of his troubles with umpires, opponents and almost everyone else, had to do with the difference between the Dominican culture and ours, but most of it was because he was a hot head. Likely his career would have been longer if he hadn't had such a bad reputation. But from everything I've read he was a great teammate, great friend.

Bell helped with the Dominican's World Baseball Classic team this year and apparently has become a good golfer. He is married with four sons.