Adam Lind has just been amazing this year, so far. 29 games into the season and he has 29 RBI, second in the league to Evan Longoria. If he keeps this up he should make the All-Star game, along with a few other Jays. The sad part about today is the bullpen couldn't hold the 1 run lead for Brett Cecil. Anyway let's put up the Fangraph: 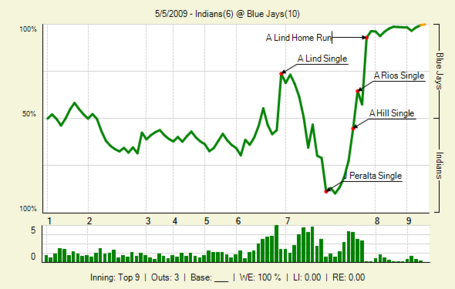 A thing of beauty isn't it. Cecil had a good start, 6 innings which was about as much as we could hope for, only gave up 6 hits, 2 runs, 1 earned, no walks, 6 strikeouts though he did hit 3 batters. He left the game with a 1 run lead but Frasor, Cy and Brian Wolfe couldn't hold the win and going into the bottom of the 7th inning we were down by 3 runs.

But putting up a 7 spot in the the bottom of the 7th erased that in a hurry. Singles from Chavez and Snider, a walk from Scoot, and single from Hill tied the game. A Rios single put us up by a run. After a Wells pop out, Lind and Rolen went back-to-back. And that won us the game.

A minor complaint of mine was that Downs came in with one out in the 8th in the top of the 8th with 1 on and a 4 run lead. Yesterday, we lost, in part because Downs couldn't go in after pitching 3 days in a row. Up by 4 I don't see why the closer should have to get 5 outs when we have a 4 runs lead. But it is a minor point.

Another, sort of minor complaint, is that less than 24 hours after Vernon Wells had a big two out hit to put us ahead, in a game we didn't end up winning and less than 48 hours after he hit a big 2 run homer to help us win against the Orioles, he pops out in the 7th today and in the game thread we are on him and first call to Mike Wilner is about how Vernon sucks....I know it is a 'what have you done for me lately world but in 48 hours he drove home 4 runs. Maybe we could forgive a pop up?

Anyway Jays of the Day are Adam Lind (.667 WPA), Scutaro (.173) and Brett Cecil (.134). Honorable mention to Rios for the go ahead single and Snider who was 2 for 4 and we gotta hope he is coming out of his slump. Suckage Jays are Carlson (-.394) and Brian Wolfe (-.160). In fairness, Cy came within a couple of feet of getting a much needed double play ball when he really needed it.

Anyway the Jays are off to California now for a series with the Angels and the A's. We are 19-10 and a game and a half up on the Red Sox in first. Sox play the Yankees tonight.